It's that time of year!

Ah, spring. Migrants are arriving. Grass is turning green. And warp speed must be engaged.

April and May are The Crazy Months for me– a time when jury submissions are due and show notifications are received and the Colorado Governor's Show opens. I'm also getting together and delivering summer work for the galleries, especially since I'll be headed back to Maine at the beginning of June. Holy cow! That's not much more than a month away.

First up was a commission piece for the Bird Conservancy of the Rockies, to honor a long-time staff member who is leaving the flock for another position. Jason has spent much of his time at BCR studying black swifts, a mysterious little species that nests behind waterfalls and whose insubstantial little feet oblige it to cling to rock walls instead of perching.

Their secretive nature and difficult-to-reach nests make it difficult for me to collect my own reference, so I'd like to give a big shout-out to photographer Bill Schmoker for his help there. I did see a black swift once. It was a black dot in the shade on wet rocks behind a waterfall. Not very helpful.

After the swifts were winging their way to their final destination I started work on an illustration project for Colorado Parks and Wildlife. Long-time readers of Brush and Baren may remember that the early posts of this blog (ten years ago now!) had more paint than ink in them. Funny how times change, although it's nice to revisit watercolor once in a while.

Tomorrow I'm off to Colorado Springs to present a demonstration for the Colorado Springs Art Guild, and then Friday it's back to Loveland for the opening of the Governor's Show. In between I'm hoping to get a new reduction lino ready to roll. But of course there's framing to do and...

I'll freak myself out if I think about it too much, so it's back to work. If in the next couple of weeks you happen to see a short, blonde-ish woman running around in circles with a brush in one hand and a brayer in the other... well... say hello. It's probably me. 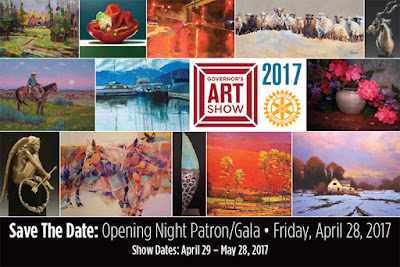 No rest for the weary around here! Next week I'll be delivering work to the Loveland Museum for the upcoming Governor's Show (more on this soon), but in between delivery and the opening of the exhibition I'll be giving a presentation and demonstration in another part of the state, at the Colorado Springs Art Guild's monthly gathering.


CSAG members and non-members are both welcome, non-members are asked to make a small donation to the program, so if you're in the neighborhood, please think about stopping by. The gathering starts at 6:30 pm on Tuesday, April 25th. Check out the Colorado Springs Art Guild website for more information.
at April 12, 2017 No comments:

This past weekend an intrepid group joined me at Patti Vincent Studio here in Salida for two days of twisting their brains around linocuts and reduction printing. I had an ambitious schedule for them, but they rose to the challenge and, quite frankly, impressed the heck out of me. By Sunday afternoon I was joking that I felt a bit redundant because they were all hard at work doing great things and I was just hovering. 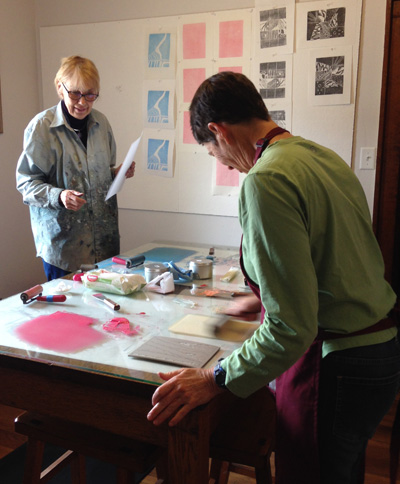 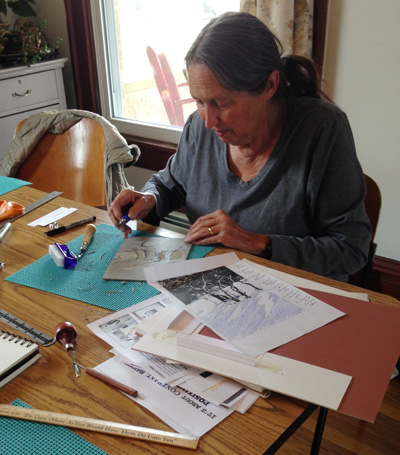 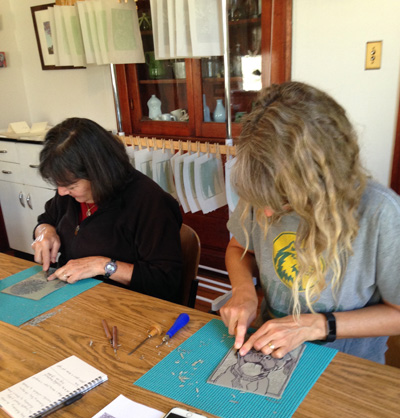 Many thanks to Patti Vincent Studio for hosting us, and huge thanks to "my" students for their energy, enthusiasm, good humor, and inspiring work. You've all inspired me to get back in to my own studio and back to work as soon as possible!