New video about my work!

Whew! What a great opening weekend for Under Pressure: Birds in the Printed Landscape at the Museum of American Bird Art. I was delighted and touched by the turnout and support for me and my work. Thanks to everyone who came to the museum, asked questions, and shared their delight and curiosity with me. I appreciate all of you.

Now that the show is up, I would like to share the short video made by filmmaker Drew Fulton that accompanies the exhibition. Drew did a great job, and I appreciate all he did to create this great overview of my linocut process and inspiration.

So what's next? This week I'll be catching up with sending some work to a few galleries, plus preparing for next week's 5-morning field sketching workshop with the Farnsworth Art Museum in Rockland. I think there might be a spot or two left, so if you'd like to join us next week for adventures in sketching outdoors along the Maine coast, pop on over to the Farnsworth website and register!
at June 18, 2019 6 comments:

"Under Pressure" is underway! 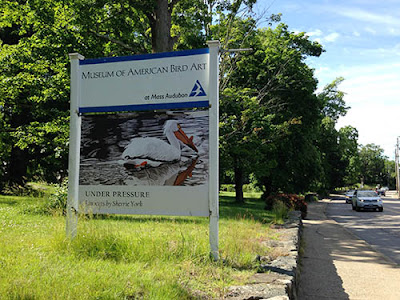 It was a busy but lovely day today here at the Museum of American Bird Art in Canton, Massachusetts. This morning started with a gallery talk and luncheon for museum patrons, a quick little printing demo, and then the afternoon public opening of my exhibition, Under Pressure: Birds in the Printed Landscape.


The show looks so lovely in this beautiful venue. It's the first opportunity I've had to mount 50 pieces of my work in one place, which was exciting and a bit unnerving. 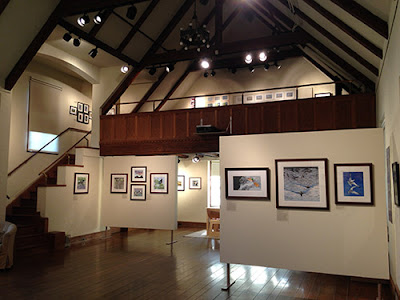 Upstairs in the mezzanine my inner educator got to have fun creating an area all about the reduction printing process.


The table case on the left has tools and lino and registration jigs... the panel just to the right of the table has photos of me at work in the studio and a description of each step of the process. Across the center are four prints from which I pulled one sheet at each stage... so viewers can see the print develop. And on the TV at right, a short film produced by Drew Fulton, which I will post here shortly. 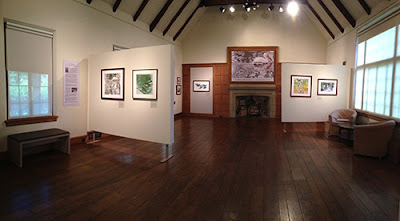 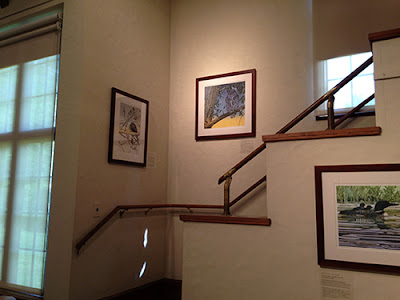 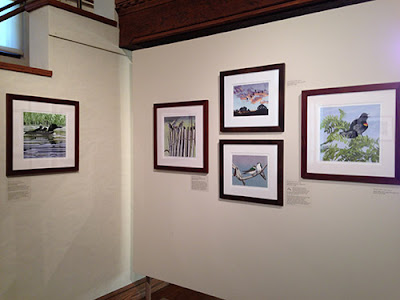 The show is now up through September 15. MABA is open Tuesday through Sunday, 1-5pm, so if you're in the Boston area, do stop on in. (Bonus: Museum admission is free to MassAudubon members.) The museum sits on 120 wooded acres, with walking trails and plenty of wildlife to enjoy, too!

I expect you'll read more about this show later, but for now I want to extend my deepest gratitude to the MABA staff, who have been so supportive of me and my work, and who pulled out all the stops to make the exhibition look fabulous. Thank you all!
at June 15, 2019 4 comments:

Under Pressure: Birds in the Printed Landscape at the Museum of American Bird Art


In less than a week I'll be loading up almost 50 framed linocuts and heading south to the Boston area, where I will install a solo exhibition at the Museum of American Bird Art in Canton.

The show, which opens June 15, will include work from across my printmaking career, including some early pieces made in the 1990s! (Practically ancient. Certainly vintage.) The brand-new harlequin duck piece, "Fourteen at Two Lights," was dry enough to frame yesterday, so this will be its first public debut! (As well as the first view of "Spring Calling," the new red-winged blackbird piece.)

Linocut in Progress: Ducking Out

Okay... after the previous stage of the current linocut in progress we were left with a rather large question: What to do about the fact that the shadowed whites of the birds were not visually shadowed enough?

At this point the potential solutions were:

1) Scrap the entire thing. This is almost never the correct answer. Reduction printing is exacting and a bit unforgiving, but who's in charge here, really? Well, okay... the art is charge... but who is the managing editor? Me. And I will find a fix.

2) Cut a second block that only includes the "white" shapes. This is a perfectly plausible solution, but it would take a lot of time. I'd have to cut and prep a new piece of lino the same size as the first, then redraw the shapes and carve the block, and THEN print. I could avoid some of the carving by cutting a mask, but either way... that's a lot of time to invest when I'm on a deadline.

3) A third solution is to employ pochoir, which is "pouncing" or "stenciling" color directly on to the prints. I've used this a few times... but never this extensively. Pouncing color will take a lot of time, too, although not as much as solution 2.

It took an entire day with a small stencil brush to color all the prints, but it probably would have taken two days to work out a second block, so win-win!

As a reminder, here's where we were at the end of Step 6:

You should be able to flip back and forth between these two images by clicking on them...

It was the right decision, and I was satisfied with the color, but I wanted one last subtle dark in the birds. Some of the white shapes on the harlequin duck have dark bands around them, and I wanted to suggest that without resorting to solid black. I spent a day doing the final cutting on the block.. making some marks that would appear as subtle feather texture as well as add the dark bands. I knew this would hardly show in the finished prints, but I just wanted to know it was there.


Okay then! Finished! And, surprise of surprises, I finished in fewer than ten color passes! When was the last time THAT happened?

As expected, this piece is turning out to be a complete pain in the neck to photograph... all that blue and high contrast. But here's a pretty fair version that's a little bit bigger, so if you click on it you should get a better idea of the finished piece.

Whew. The prints need a few more days to dry before they can be framed, but I have plenty of other framing to do before I'm ready for this one. I leave to deliver my show at the Museum of American Bird Art in just over a week... nothing like having everything come down to the wire.

As for what's next... Expect a studio pause while I finish show prep and installation. And then? I've got a hankerin' for some smaller pieces... stay tuned.