It's hard to believe that I've been in Maine for almost two months now. That familiar dichotomy of just arrived/been here forever has taken hold and I find myself conflicted, as always, about the approaching transition back to the west.

Here at Hog Island Audubon Camp we just wrapped up another action-packed Educators Week. Fifty teacher-naturalists from across the educational spectrum gathered on the island and spent 5 days learning about the natural history of Maine and sharing ideas about how to bring their enthusiasm for the natural world back to their communities.

There are a zillion images to share about the Hog Island experience, but I don't want miss an opportunity to share our Artist-in-Residence program. Full disclosure: I am the program coordinator, so my excitement about it is sort of a given, but it's the unexpected results of sharing the island with campers and artists simultaneously that really gets me going.

Dan Grenier was with us these last two weeks, working on a project connecting people who work behind the scenes for the environment to place. He made thoughtful portraits of campers and staff, but not just digital snapshots. Oh, no no no! Check this out:


We're excited to see the end results of his work, but of course we'll all have to wait... Dan included! I like to think of Hog Island and the Audubon Artist Residency as a bit of a throwback to slower, more thoughtful times, and Dan's project as well as his antique cameras and generous energy were a perfect fit. (Thanks for a great two weeks!)

The application period for the Summer 2018 Residency season will open in mid-October. Check out the information for yourself or someone you know, we'd love to welcome you to the island next year!

It's my first morning back in Maine after almost a week at the Museum of American Bird Art (MABA) in Canton, Massachusetts. This past weekend ten inspired and inspiring participants joined me on a journey into reduction linocut; we had a great time and they did some great work!

Before that workshop began, however, I got to spend a little time working with students at MABA's Wild at Art Summer Camp, a program for kids age 4-13. They had been using pollinators as their creative inspiration, so butterflies, bees, bats, and birds were the theme for collagraph prints. 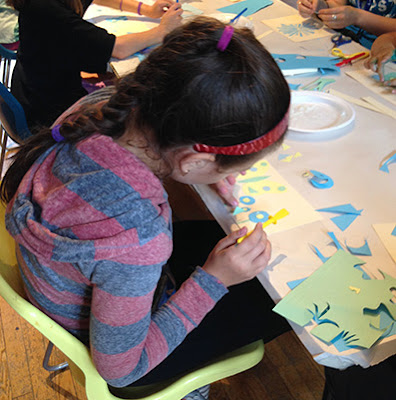 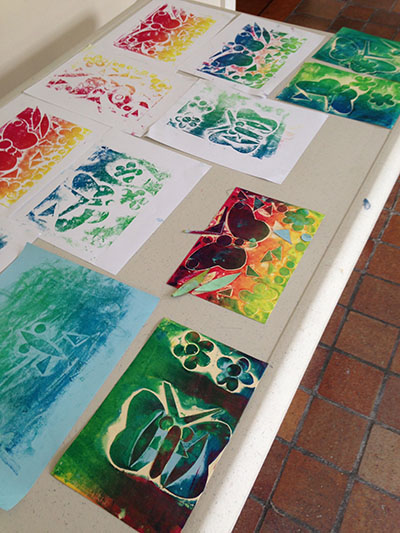 The following morning the over-18 set arrived for an intense two days of linocutting. Most had never tried linoleum block prints, and those who had done block prints before had generally not picked up a tool since high school. (Except for one who hadn't picked up their tools since they worked with me last year. Ahem. JP, I'm looking at you. ;-))

We spent a half day getting acquainted with tools, carving, inking, and printing by creating some linocut "samplers." 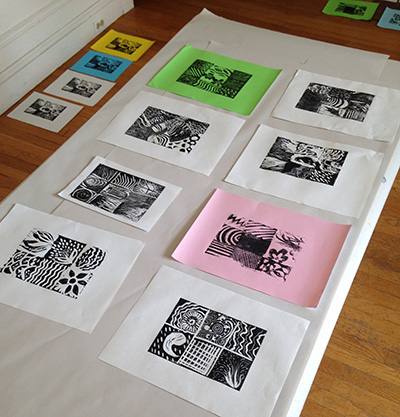 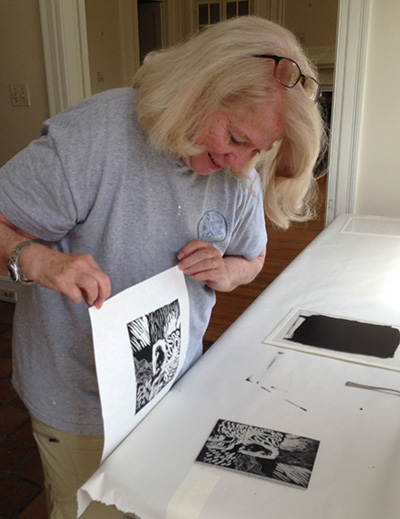 These were great fun, and it was fascinating to see the variety of marks and textures everyone achieved.

Armed with a little experience and some new ideas we jumped on in to reduction printing. It pleased me to watch the smoke coming out of my students' ears as they wrestled their brain cells into the world of inside-out-and-backwards that is relief printing. 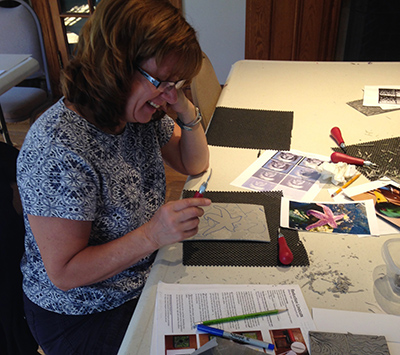 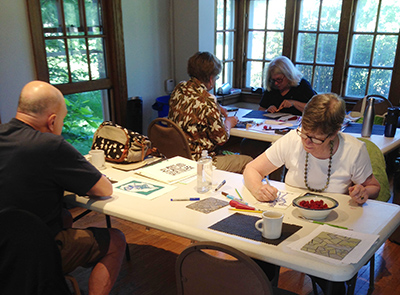 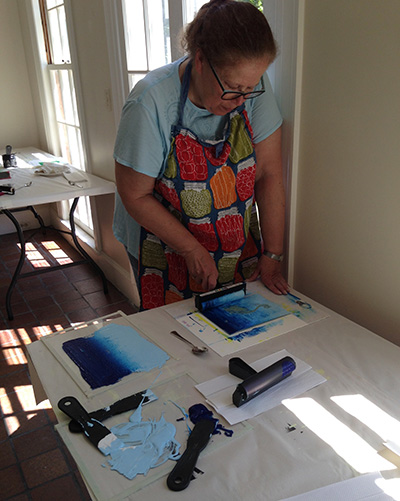 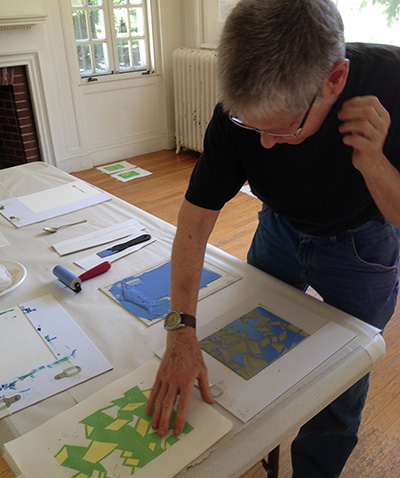 The only disappointment to the weekend was that the instructor (ahem) did a lousy job of photographing everyone's work! But here are a few images that show the range of approaches, from geometric abstracts to intricately textured seascapes. 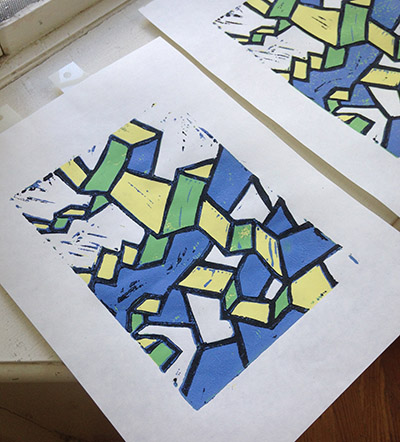 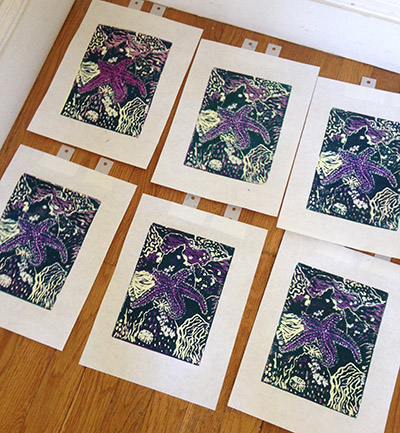 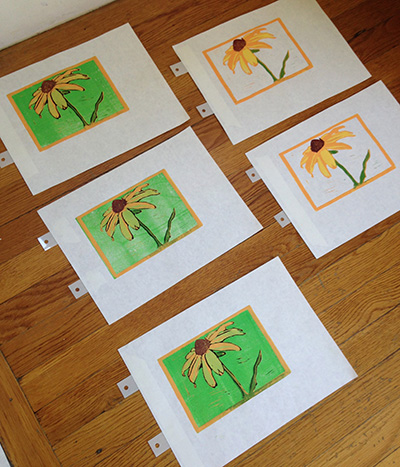 Many thanks again to the staff at the Museum of American Bird Art for hosting the workshop and to the fun and enthusiastic participants. I hope to see you again next year!
at July 13, 2017 2 comments:

Picture a window seat long enough to sleep on, one that looks out into the thick and richly textured green of the Maine woods. Now picture me, cozy under a puffin-themed quilt, laptop perched across my legs. Rough life, ain't it?

Ah, but it gets worse.


We've been on break this week at Hog Island Audubon Camp, so I've been spending some time with my friend Sue, who is the Assistant Manager of the research islands maintained by Project Puffin. Some of our time has been spent picking up, dropping off, and provisioning researchers, who spend two weeks at a time living and working on one of seven small islands where seabird conservation projects are underway.


On one of these days we made the logistics run to Eastern Egg Rock, home to the southwest-most Atlantic Puffin colony in the US, and site of Project Puffin's first restoration success. The way it usually works is that we pile people and supplies into a motorboat, make our way out about 9 miles to the Rock. There is no dock and no way to get a large boat close to the island, so we pick up a mooring and someone from the island rows out to us in a small rubber boat. Personnel and supplies are shuttled back and forth, then we drop the mooring and head back to the mainland.

On this day, however, the island personnel had reported a problem with their electrical/solar system, so we were going ashore. Their problem became my gift, as I got to spend about an hour in an observation blind while they worked on the system.

The trip out had been a wet and wild adventure. The seas were very choppy and we were surrounded by rain squalls. We arrived at Eastern Egg Rock soaking wet and very cold... but who cared? We were surrounded by nesting terns, puffins, guillemots, and gulls!


Speaking of guillemots.... this past week we also celebrated International Guillemot Appreciation Day! The endearing faces of puffins attract a lot of attention and adoration, but what about its equally important and intriguing cousin? Mark your calendars and join us next June 27 by donning your black, red, and white attire and whipping some some treats like this 7-Layer Guillie Dip.


Up Nest... I mean Next.
Some of this seabird ogling will have to stop soon, but other adventures will soon appear. I'm off to Massachusetts on Wednesday, gearing up to present a 2-Day Reduction Linocut workshop at the Museum of American Bird Art in Canton, and then it's back to Hog Island for Educator's Week. Wheeeeeee!