Back Where I Started

Maine said goodbye in the same way it greeted me in May: With rain and mist and a sigh. 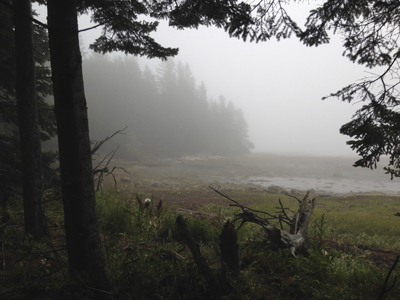 But before that, things were a blur of activity. Some teaching, some drawing, some socializing.


I've been back in Colorado for a couple of days now, but am finding the transition a little bumpy. I've had to hit the ground running-- shipping sold work, framing and ordering frames for upcoming shows, plowing through three months of mail and bookkeeping. My internet service was reinstalled this morning... and slowly but surely I'm finding my feet again.

I'm anxious to get back to work on linos... in fact it's imperative that I do so soon. I'm scheduled to give a demo at the Woodson Art Museum's "Birds in Art" exhibition in less than two weeks and I have nothing started. Eek. Tomorrow will be one more day of "other stuff," but Monday it's back to the studio! Hooray!

Still, it's hard to listen to the sounds of town and remember that for the last three months I've had seabirds, loons, waves, and boats as my background soundtrack. But as Dr. Seuss said, "Don't cry because it's over, smile because it happened." And I've got a lot to smile about.

It's Tuesday evening here in Muscongus Bay. I'm still on Hog Island, where Family Camp began this evening in a deluge. We have big rain forecast all night, so I battened down the hatches at the Cottage and came in to camp. Everything is quite snug out there, but I'm on deck to teach a workshop in camp tomorrow and depending on the weather it might happen first thing in the morning. It seemed prudent to spend the night here rather than start my day hoofing it in through rain and mud.

I've been finding a rhythm out in my little cabin in the woods. Sketches are being made, albeit slowly and without much focus. It's been a long time since I let myself draw any old thing that appealed to me, so here's a peek at what's been catching my eye.

Suddenly my entire summer away from Colorado is almost over. Hard to believe I've been away since May, and harder yet to think of leaving the island in just two weeks. It's been a great adventure and I am not at all ready for it to end.
at August 12, 2015 1 comment:


August. Hard to believe that I left Colorado in May and am still away. I've changed hats yet again... from Program Manager to Euro-traveler to Instructor... and now Artist-in-Residence.

I'm still on Hog Island, but I've moved from the camp peninsula on to the main part of the island. I've made my own camp in two historic buildings, known jointly as the Bingham Cottages.

Millicent Todd Bingham gave Hog Island to the National Audubon Society in 1936, naming the Todd Wildlife Sanctuary for her mother and establishing the camp's mission as a teaching facility. What we today call "the Binghams" are the last two remaining buildings of the original 8 that were the summer compound of Millicent's parents, David Todd and Mabel Loomis Todd. Mabel's story is long and complex (and a bit scandalous), but she is probably best known as the woman who first edited and brought to publication the poetry of Emily Dickinson.

The cottages were restored in 2012 through the efforts of the Friends of Hog Island volunteer association. In 2014 both a writer and a playwright spent time working in these cottages, and the Bingham Cottage Artist Residency program came to an informal start.

Part of my tenure here is to help formalize the residency program, which we hope to launch and  begin taking applications for this fall. I'm staying in the cottages with one eye to potential residents who won't necessarily already have a connection to this place and its wonders (or quirks). A sort of shakedown cruise to iron out the wrinkles. If you're in to mixed metaphors. Which apparently I am.

The cottages are "rustic," which means no water and no power. Well... there's a small solar panel which provides enough juice to power a laptop or cell phone and a small light in the Lodge, but the Writer's cabin is strictly off-off grid. And yes, there's an outhouse.

But I have my own beach (when the tide is out), my own red squirrels, and from time to time my own bald eagles perched in the "yard." 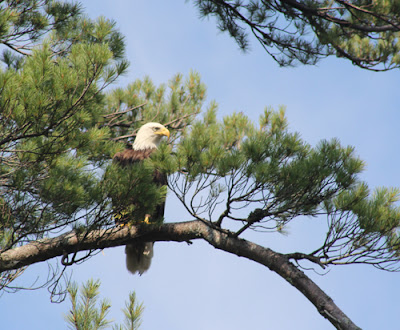 What I don't have is a lot of success yet with drawing. Mostly I keep trying to tackle things that are entirely too ambitious, too complex. When I sit down and draw the things I've been carting around in my pockets, no problem. But what I love most about this landscape is the intricacies of ferns and mosses and the ridiculous shades of green. When it comes to drawing, this landscape does NOT love me back.
At least not yet.

Of course part of the "problem" is that I've set myself up to try to accomplish entirely too many things while I'm here. The project I arrived wanting to do has already morphed into something else. And there's the residency to hash out. And some interp displays to get started on. And a couple of little sessions to do at Family Camp next week. And of course there's still a social schedule. ;-) So I'm constantly distracted. And while I'm seeing a zillion potential linocuts, that's not what I thought I would be doing, so of course I didn't outfit myself for it. Ah, well. I'll figure it out. 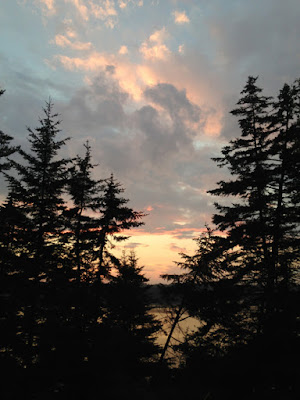 Until then, I'm enjoying many beautiful sunsets (doesn't this look like a good potential lino to you?) and the companionship of waves and seabirds. Not a bad way to spend my time.
at August 05, 2015 8 comments: