Reduction Linocut Workshop at the Museum of American Bird Art 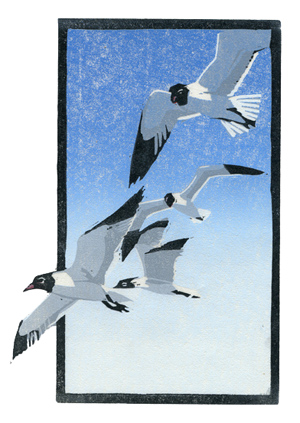 We just wrapped up a great week of Arts & Birding here in Maine, but my adventures on the east coast are far from over. Next up: A weekend of reduction linocutting at the Museum of American Bird Art in Canton, Massachusetts (Boston area), July 8-9. I'd love to see some eastern peeps come out for this event, so please pass the word to the lino-curious in your world.

Perhaps the best thing about linocuts is that they can be created with the simplest of tools at your kitchen table, entirely by hand. So, yes, we'll be hand-printing! Workshop participants will take home a small edition of reduction prints and the knowledge and experience to create their own new works at home.

The 2-day workshop will cover:

• How to design an image for reduction printing

• How to transfer your design to the linoleum block

• Registration methods (how to line up each color so it prints in the right place!)

We’ll also talk about papers, inks, tools, and the wide variety of applications for relief printmaking.

Registration info is available at the MABA website.
at June 16, 2017 4 comments:

If you've been checking in with Brush and Baren for a while this won't be the first time you've encountered a post with photos from the coast of New England instead of the Rocky Mountains. I've been migrating east to be an oh-so-fortunate member of the instructional staff at Hog Island Audubon Camp since 2008, and coming to this chunk of Maine rock every year feels like coming home.


This year I'm an instructor for two sessions, Arts & Birding (which starts tomorrow) and Educators Week (which is in July). In between I'm taking care of some tasks relative to the Audubon Artist Residency here on the island and presenting a 2-day Reduction Linocut workshop at the Museum of American Bird Art in Massachusetts. It's a busy summer... but aren't all summers busy?

The highlight of every Hog Island camp session is a boat trip to Eastern Egg Rock, home to a restored Atlantic Puffin colony that is the focus of research and education for Project Puffin. I tagged along on a trip last week and took advantage of the opportunity to be a participant instead of an instructor. 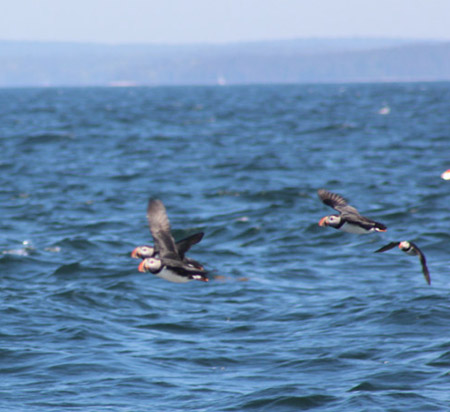 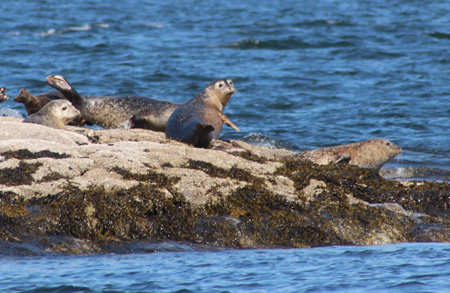 .
Many threatened bird species are colonial nesters, and biologists have successfully used decoys and other techniques (like vocal recordings) to attract birds to suitable habitat. It's a strategy called social attraction; you can think of it as "make it look and sound like a (tern, gannet, puffin, albatross, oystercatcher) party and they'll come."

Social attraction techniques require decoys of the focus species, but it's not like one can walk in to the local hunting outfitter and buy an Atlantic Puffin off the shelf. For many years the manufacture of seabird decoys for bird conservation was the province of Mad River Decoys in Vermont, but when the owners of the company decided to retire, Project Puffin moved the factory here to Maine.

Which is a long introduction to this photo:


It's not a lino, but this blog is called Brush and Baren. That's me, painting face details on a Laysan Albatross decoy.

I did spend a little time this week with my journal, but starting tomorrow we'll be "all sketching - all the time" until next Friday. Hopefully I'll have a thing or two to share with you along the way.