(Phone blogging. It's an experience.)

I'm here! I arrived in Wausau last night and slept like a log in the Museum guest house. Directly across the street a steamroller slumbers, too. We'll be introduced tomorrow.

In the meantime, I took advantage of the spectacular weather and went for a walk this morning along the Wisconsin River.

Back home "my" river, the Arkansas, still barely flows. Each time I visit it I search for signs that the level is rising and a respite from our long drought is at hand. So far I've been disappointed. 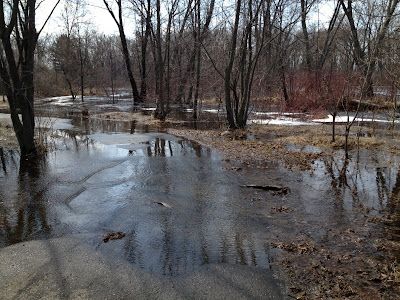 Finding the Wisconsin River gently (so far) escaping its banks was a surprise and delight, but even more surprising was my guilty feeling. Admiring the excesses of another river seemed disloyal, somehow.

Discovery trumps guilt, though. Bird species both familiar and unfamiliar are all around, and it's fun to chase down an unknown singer.

I'm glad I took some time to explore, since tomorrow things start rockin' and (steam)rollerin'!
- Posted using BlogPress from my iPhone 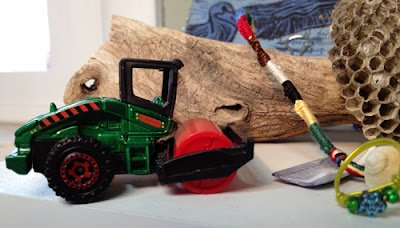 It's certainly a different sort of field work than my usual: I'm off to my artist-in-residence gig at the Woodson Art Museum. Please send good weather juju for the May 4th steamroller event, and stay tuned!
at April 26, 2013 4 comments:

Go ahead, start laughing now, everyone. I'm four days from departure for my residency at the Leigh Yawkey Woodson Art Museum and two days ago I decided I wanted a demonstration piece other than the gerenuk linocut I worked on earlier this month.

The change was partly motivated by practicality. I've been gathering supplies to ship ahead and I have decided that my larger registration jig is more than I want to deal with. But of course that's the jig I used for the gerenuk, so something had to be started with my smaller setup.

Enter another little magpie piece. In total it will involve just seven color passes, and I can say that with confidence because the first six are already done! The seventh will be finished on site next week.


I didn't want to get too crazy with the background on this demonstration piece, so just employed some "swoopy" lines. 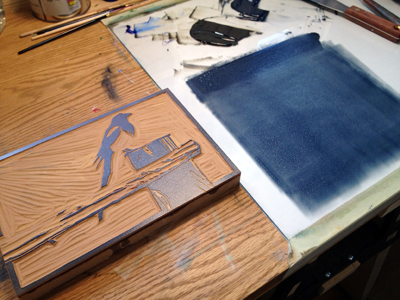 The apparent dark brown of Step 6 was achieved with the application of a transparent blue over the rusty brown. Basic color theory at work: complimentary colors (opposites on the color wheel) mixed together to create more neutral hues. The final color will be a blue-black, so using a transparent blue at this stage should support that and keep it from being too brown.

It's a "quick-and-dirty" demo piece, given that I didn't even have an image in mind three days ago, but I think it will do the trick. Whew. Now I can think about all the other things I have to do before I go!

Bring on the heavy equipment! 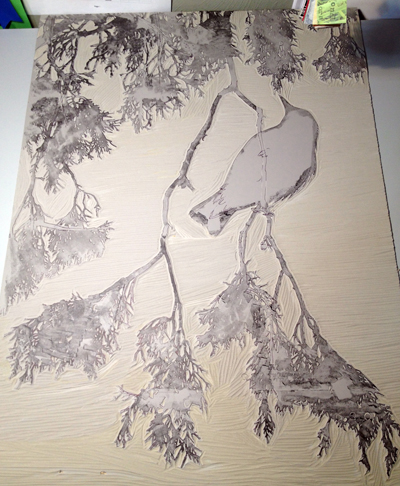 Alrighty then! One thing ready and checked off the list for my upcoming residency at the Woodson Art Museum. One 24 x 36-inch block ready to take on a steamroller on May 4!

It will be a busy week.... check out this calendar of events and stand by while I wrestle with my inclination to start another new linocut for demonstration programs. 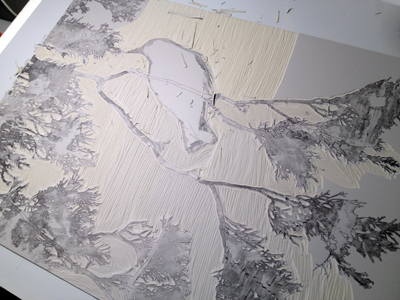 Making progress. About a third of the 24 x 36-inch chunk of lino to go. I'm planning to ship it out to Wisconsin on Monday or Tuesday next week, so feeling reasonably confident that it will be ready to go. I might have a little time to tweak it once I'm on site. Or not.
at April 17, 2013 1 comment: 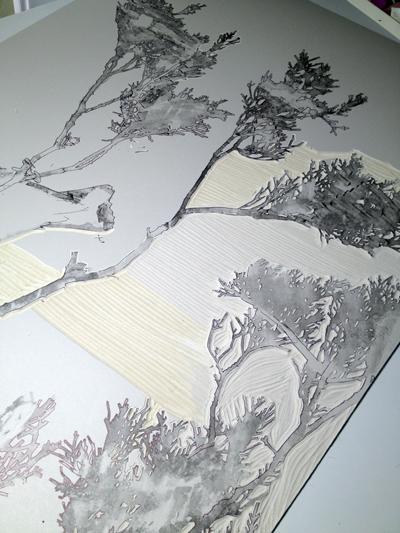 Once upon a time I was certain that my favorite part of relief printing was the carving of the block. Pulling the first print was exciting, but editioning and subsequent cleanup seemed anti-climactic.

These days I find I really enjoy the printing part. I like experimenting with transparent colors and seeing the image emerge over time. I even get so impatient to just get ON with printing the next color that I sometimes get myself into trouble.

So the good news is that it's going to be a few more weeks before I have to clean up after the printing of this stout 24 x 36-inch chunk of linoleum. The bad news is that I've been carving for hours and don't seem to have much to show for it. Ooph.

The reason for all this personal torment is of course my upcoming residency at the Woodson Art Museum in Wisconsin. It's just two weeks away! Well... I leave in two weeks. This block and some other gear need to ship in just one week!

Thankfully I wrapped up a big illustration project yesterday so this block can live on the drawing table for a few days and I can work on it in small batches of time. The gerenuk demonstration piece may or may not move any further forward before shipping date... but I feel like it's good enough shape to go "as is."

But wait, there's more! You didn't really think I'd leave off after the previous post, did you? 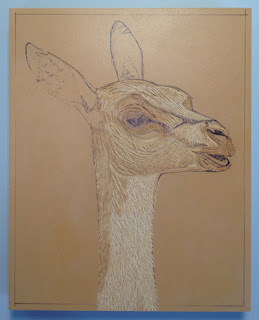 There was a lot more fur to carve, so my skinniest tools got a workout. And I should have known that last week's studio sweeping/vacuuming efforts wouldn't last long. All those tiny lino chips are everywhere.  Again.

I twiddled around with the Step 5 color for a long time, but never really got to what I wanted. Several variants emerged, all of which had some merits. I liked the version in the upper right best, but didn't hit it until I was almost out of prints. 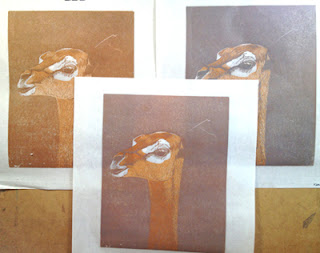 Clearly this is a situation that highlights the limits of reduction printing. If I had carved an individual block for each color I could have gone on experimenting until I ran out of paper or ink or both and still have been able to create a viable edition once I sorted out the color palette. (When my new shipment of supplies arrived, that is.)

But the moment I started carving for the second color pass I was limited to the number of prints pulled at the first stage. And since I'm keeping one print from each step in reserve as an example for the demonstration.... well... There's not much room for mucking about.


In the end I had the most consistent prints in this color palette, so the image will move forward from here. 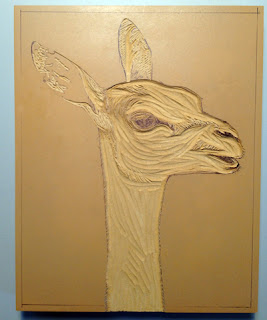 Almost all those noodly little cuts that suggested fur were cleared out with a flat gouge for Step 6.

I debated the next color for quite a while. The darkest bits of the image are details of the gerenuk's face, but leaving them for last (when only those wee bits of block material would remain) would make final registration more challenging. I could have cut masks and done some selective inking, but I wanted this piece to be a straightforward demonstration of reduction printing.


Let's go for the big drama early, and then mess with people's minds later.

I could call it finished at this point. (Hahahahahah! Right.) OR I could carve for one more even darker dark (a straight-up black, I suppose).

OR I could consider doing something a bit wild and crazy and make the next pass lighter. Hmm. Could be interesting....
at April 09, 2013 4 comments:

With the clock ticking and my Woodson Art Museum residency looming it was imperative that I get a demonstration piece started this week. The smartest idea, of course, would be to choose a simple image. Big, graphic shapes. Not too many colors. And, HONEST, I thought this would be that piece when I started. Really I did.

The gerenuk is an antelope native to East Africa... which is, of course, why I found them at the zoo in Denver. They are crazy, skinny, ungainly things to draw, but they have sweet tan faces with big, white circles around their big, brown eyes. A portrait might be nice.... and "just" three colors. Basically. Mostly. Kind of. 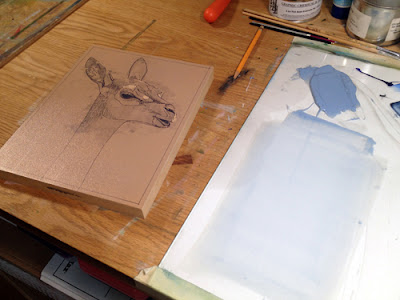 First carving of the linoleum block. For the brightest whites, of course. Rolled up in a transparent blue-gray ink to create some shadows. 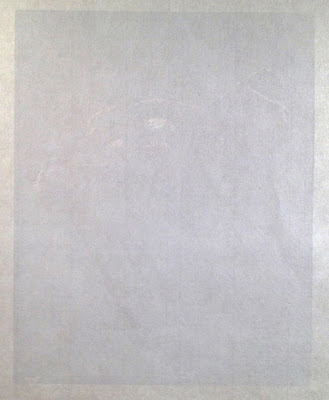 Not much to see here, but the first color went fast. "Simple," I told myself. Again. 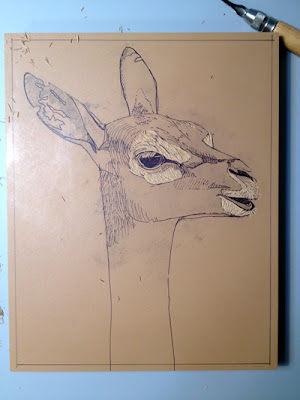 Second carving. Pay no attention to all those little lines I started drawing. This is a simple image. 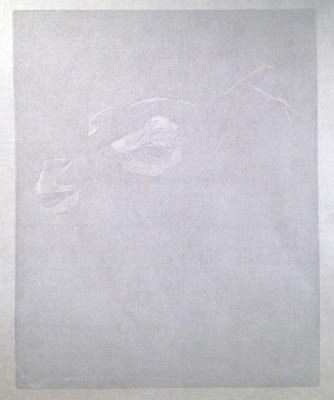 Second color printed. Piece of cake. Now for some fun... the orange-y tan color of the overall face and neck. 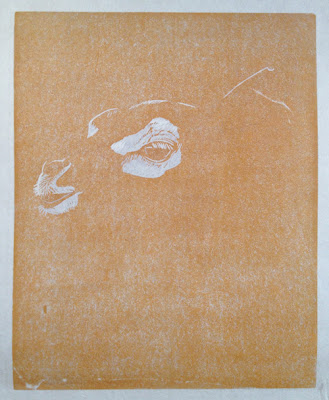 This is a mammal. It has fur. Fur would look cool. I can't just leave a big flat shape, can I? 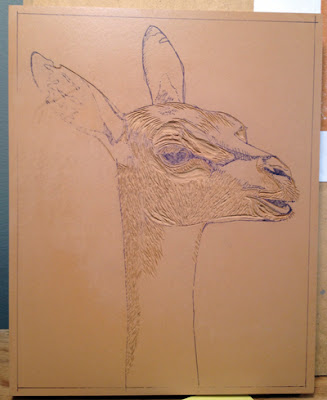 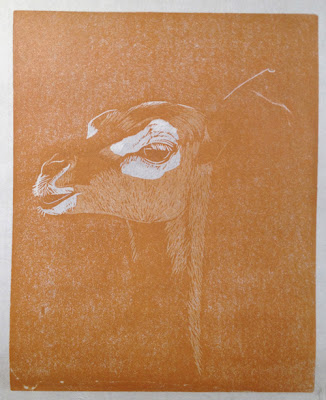 Fieldwork Friday: Warthog (Why not?)

One of the few things that I regret about living several hours from any big city is the infrequency of my zoo-drawing expeditions. When I lived in Denver I filled a large sketchbook with zoo sketches every few months. Now it takes a year, sometimes two.

I enjoy drawing at the zoo, but some days I despair at the things I overhear. The "Disneyfication" of animals makes me crazy. Every clown fish is Nemo. Every warthog is Pumba. (sigh) I suppose I should be pleased that observers can recognize the origins of animated characters, at least...

But there's often something to chuckle about, too. (Remember the story of the kid and the brain-sucking giraffes?) Not long ago, as I sat drawing a camel, a family consulted their zoo map: "I think these are dromedaries. Where do they keep the bacterial camels?"