What's it All About Wednesday: Gaining Ground

With my studio and living space piled high with boxes, getting a new linocut finished... or even started... has become a far away dream.

But that just means it's time for another chapter of What's it All About Wednesday! Today's lino: Gaining Ground.


Since I'm headed to Maine (in three weeks! ack!) it seemed natural to take a look at one of the most engaging bird species of the northern Atlantic coast: Puffins!

Long-time Brush and Baren readers will know that since 2008 I've spent part of each summer as an instructor and Artist-in-Residence program coordinator at Hog Island Audubon Camp in Maine. Originally envisioned as a place for teachers to come and learn about nature, the camp opened in 1936 with such luminaries as Roger Tory Peterson heading up the staff.

Fast forward to 1969, when a young biologist named Stephen Kress joined the camp's instructional team. Surprised to learn that Maine's coastal islands had once been home to the nearly-extirpated Atlantic puffin, Steve wondered if there were a way to bring the birds back to their former breeding grounds. It was a question which led to the launch of Project Puffin in 1973 and subsequently to the development of seabird conservation techniques that today are employed around the world. 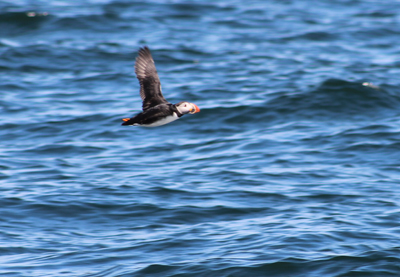 Project Puffin and Hog Island Audubon Camp remain closely connected, and one of the highlights of every camp session is a boat trip to Eastern Egg Rock to see puffins at the site of their first successful reintroduction.

The puffin in "Gaining Ground" is one of Egg Rock's current residents. The title refers both to this individual's waddle towards the highest point of rock, and to the slow but steady increase in the Maine puffin population overall.

While it's wonderful to celebrate the successful return of the species to its historic breeding grounds, we can't just wipe our hands, pat ourselves on the back, and walk away.

In 2012 the northeastern US experienced its warmest March on record, and temperatures remained high throughout the breeding season. The Gulf of Maine is heating up faster than almost any other marine environment on earth, and warmer waters mean changes in available food species. A water temperature rise of just 3 degrees meant puffin parents couldn't find enough small, slim, cold-water hake or herring to feed their chicks. Instead, they found warm water butterfish... which are too fat and round for chicks to swallow. Only 31% of Maine puffin chicks survived to fledging in 2012. The others starved to death with fish at their feet.

The long-term future of puffins in the Gulf of Maine remains uncertain. Good fisheries management has led to increases in the population of the once-endangered Acadian redfish... a good food source for puffins. But the continuing volatility of ocean temperatures can lead to disaster at any moment.

Perched at the border of the US and Canada, Machias Seal Island hosts the largest puffin breeding colony in the Gulf of Maine– 5,500 pairs. But locally warmer surface temperatures in 2016 again created a lack of sufficient food, resulting in almost complete nest failure across the colony.

Monitoring, protecting, and researching the lives of puffins and other seabirds helps us understand the larger changes in our environment, and I am proud of the efforts of my friends and colleagues at Project Puffin and other research projects across the globe. Of course puffins are fun subject matter for a linocut, but for me part of the joy of creating this piece was celebrating the hard work and dedication of biologists everywhere. Thank you all!
at October 11, 2017 3 comments:

Email ThisBlogThis!Share to TwitterShare to FacebookShare to Pinterest
Labels: linocut, Maine, Project Puffin, puffin, What's It All About Wednesday

Hey! Where have you been?

It's a valid question. It has been a couple of weeks since Brush and Baren has seen a post, so here's a quick catch-up.

Work! I had a small illustration project under a quick deadline, so had to put my head down and pencil to humming for about a week. Project complete? Check!

I was also doing prep work for the 4-week Drawing Essentials class that I'm leading at the Salida SteamPlant, which started yesterday. Class underway? Check!

I also had some out of town visitors and I've been checking in every day with a friend's business while she's away. Miscellaneous distractions? Check!

All of which brings me to the state of affairs today... which is this:

Not a little throw-it-in-your-friend's-pickup-and-haul-it-across-town sort of move. Nope. This is going to be a 2200+ mile, multi-day, cross-country endeavor. And not a start-slowly-work-your-way-up-to-it departure date. Oh, no. I'm leaving at the end of October, moving from Colorado to Maine.

I must be out of my mind.


The story of how I got to this point is long and somewhat convoluted, so let's just say it's a case of something that simmered for a long time without ever becoming a meal... and when I turned up the heat it just boiled over.

So here I am, trying to cull my belongings down to a moveable volume, figure out how to transport and store all my artwork inventory (and my press), and deal with a growing to-do list... in just four more weeks.

Somehow I also thought I'd do a new lino before I left, too, but I'm beginning to believe that's a tad too ambitious. We'll see. I have a big one on the drawing board... I might have to modify my goals.

In the meantime, I've already scheduled my first Maine gig! I'll be a presenter at the Midcoast PechaKucha Night at the Camden Opera House on November 10. I'd not heard of the PechaKucha format, but it's pretty cool. I get 20 slides for 20 seconds each... so not quite seven minutes to tell my story and introduce myself to a new community. It turns out PechaKucha is a worldwide phenomenon, you can check it out on the PechaKucha website.

Before you go wandering off to watch PechaKucha videos, though, here's a linocut in honor of the autumn season. See if you can find the little hawk who's moving at the same speed I am at the moment.