Fieldwork Friday: From the archives

Thirty-six hours. Maybe less. In just a day and a half I expect to be settling down finally into one location and happily living with my work again. I have big plans for Sunday morning that involve ink and pajamas. Which, now that I think of it, probably sounds a wee bit strange. But hopefully long-time readers will be able to explain it to newcomers in a way that doesn't make me sound too eccentric.

ANYWAY. Since I don't have new lino work to share (although I do have a block all drawn up and ready to go!) I thought I'd get Mr. Peabody to fire up the Wayback Machine and see what we could see. 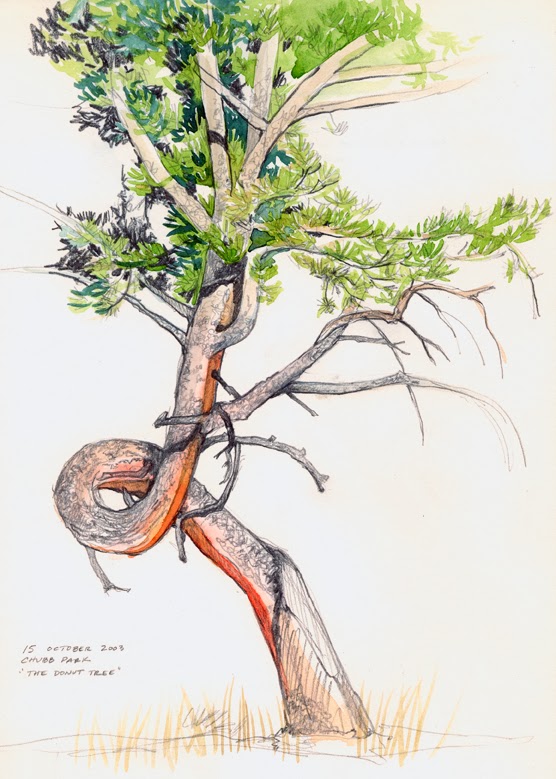 So here's an old sketchbook scan dated 2003. This is a fabulous ponderosa pine living and growing in Chubb Park, a lovely area at the eastern edge of our small county. At least I presume it's still living and growing there ten-plus years later. I need to go look for it again.

I dubbed this "the donut tree," for obvious reasons. Its mysterious growth pattern seems a fitting metaphor for my own journey of the past several months. Got a little twisted around, but now it's onward and upward again!
at February 28, 2014 4 comments: 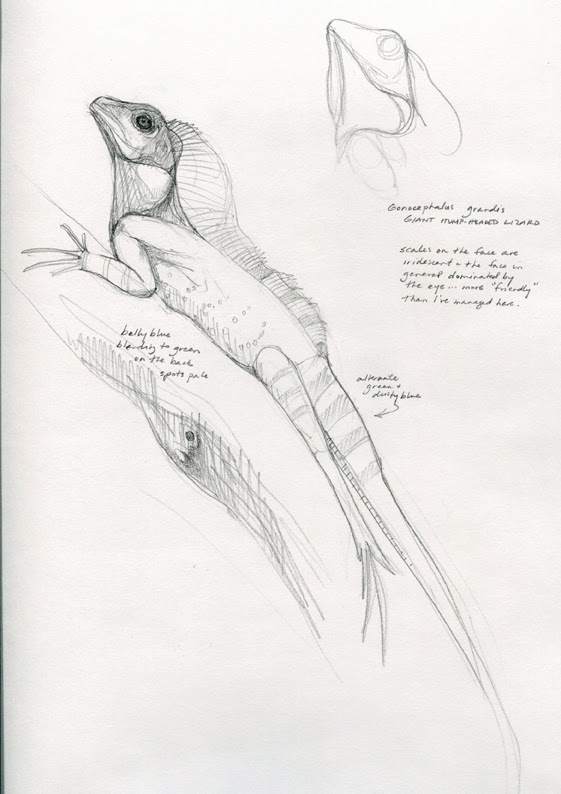 I mean, really. Why WOULDN'T you want to draw a beast with a name like Giant Hump-headed Lizard? (Although sources other than the zoo call this "angle head lizard," which is equally amusing.) This one was a willing zoo model. I love how it rests with its hind legs straight out behind it. And those ridiculous toes! I do wish I'd had color with me this day because they're really very lovely in blues and greens.

Moving madness continues. Household is more or less settled... just trying to wrangle a team to schlep the studio now. Hopefully next week!
at February 21, 2014 No comments:

Linocut in Progress: Or perhaps we should say FINISHED!

I was hopeful that Step 9 would be final pass for the cormorant lino, but hey. This is me we're talking about.


I liked it, but felt that the sense of depth could get one more boost if I applied an additional dark to the right side of the image. (Those closest rocks.)

So along came Step 10, a transparent black... just enough to goose those forward rocks into a bit more detail and bring them forward.

Yep. I think that pushed the birds back a skosh. That last dark looks REALLY dark in the photo, but the ink is wet and shiny and I think the camera just wants that contrast. Which suggests that getting a good shot of this piece is going to be challenging. We'll see once it's dry.

I'm considering "Telling Fish Tales" for the title... because every time I look at the interaction between the birds I can imagine the center fellow describing the one that got away. ("It was THIS big!")

I have my own story to tell with arms spread wide... mostly to accommodate the schlepping of boxes. After far too many months in limbo I finally found a place to live here in Salida... and I've spent most of this past week moving. Again. (Essentially the fourth move since October.)

Unfortunately the expense of the new space means I'll have to give up my lovely studio here and move back into 80 fewer square feet. Ooph. Gonna be tight. But I'll be happy to be all under one roof again and able to live with work in progress. Literally. It will also feel good to be unloading more extraneous stuff. I did a big purge before the first move, but since it looks like it won't have been quite big enough I can look forward to running a little leaner yet.

It will be a couple of weeks before I'm completely resettled, but knowing that the end of limbo is near helps a lot!

And never fear! I already know what the next lino will be... hoping to get it drawn up this week when I can't stand to look at another box.
at February 15, 2014 7 comments:

After all that fussing around looking for the right rusty color I thought gray would be a piece of cake. Or at least a piece of soft lino. Wrong-o. 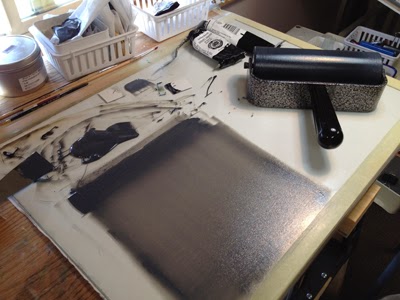 It's a nice-looking gray. Transparent. Not too blue, not too brown. 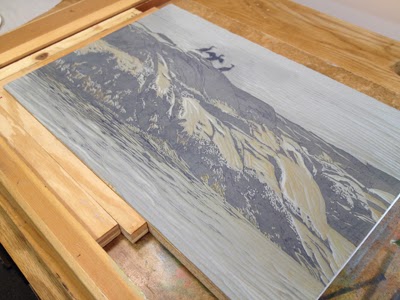 Looks nice rolled up on the block.

Linocut in Progress: Emerging from the fog

I just realized that the title of this post could be applied both to this linocut-in-progress and to life in general right now. In either case, I think it's a good thing.

After the printing of the first "rock weed ochre" layer I wanted to add some depth and texture to keep it from appearing as a flat shape. Enter all the "noodly" carving of the previous post.

A second ochre layer definitely brought some subtle texture and interest into the scene. And now for a little drama.

It took a surprising amount of time to hit this color just right. Most of it will be covered up by two more gray layers, and I struggled to find a rusty color that wasn't too orange when it went down over the ochre layers. It seems a little dark here, but some of that is a function of the photo. I hope the rest will resolve with the next colors.

So now it's back to "noodly" carving and then a gray that will hopefully tie everything back together again. I'd like to print tomorrow, but if this doesn't dry enough overnight it will have to wait until Sunday. In the meantime I'm going to mount up another large-ish (12 x 18 inches) block like this one and start drawing up another print! Deadlines are looming!
at February 06, 2014 2 comments:


The tide is low in the Gulf of Maine and our trio of cormorants is perched above the splash zone... soooooo.... the next color down is rockweed ochre. This required a bit more muscle than expected as the print was probably bordering on too wet. But I powered on through and they're all hanging tidily on the rack.


Should be plenty of time for drying now... look at all the noodly bits of carving I have to do! Kind of fun, but it definitely requires a lot of getting up to wander around and look at something else to give my eyes and wrist a break. But never fear. If Annie Bissett can carve the entire text of the first page of Genesis from wood, then surely I can manage a bunch of weedy little dots in lino.

I do, however, think I require a cookie before I can go on today. Since there are none in the studio... it's time to take a walk! 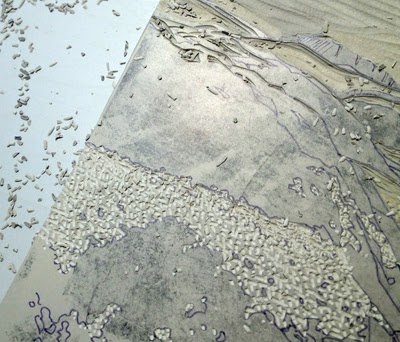