Linocut in Progress: A mask and muddle

Whew! I don't know about you, but hot weather just makes me move like I'm under water. I started this edition with 26 prints (I've already trashed one), but it seems like it takes forever to print each color pass. This morning I got through three NOVA programs on PBS before I finished printing, and that didn't include clean up.

But I'm ahead of myself.


Which is why everything now looks a bit gray. In good light with good photography you might be able to tell that it is blueish-gray... but in this case you'll just have to take my word for it.

And now the trouble. I seriously need the next color pass to look blue... AND I need it to be a rather pale blue, no darker than the current overall value of the image. What the heck am I gonna do?

Had I taken the time early on to cut a fussy mask and confined the peachy color to small areas, getting a light blue would be easy. But I traded the tedium of cutting masks for the anxiety of balancing opaque and transparent inks. I'm not sure that I did myself a favor either way.

ANYWAY. I got out the white. And my leftover bits of transparent blue from the previous color pass. And a little more blue ink. And just because I didn't have a large enough pile of ink, I got out some more transparent base, too.

The good news/bad news about using white is that it's opaque. Using it will help reduce the influence of the previous color passes on the new one. But it's also... opaque. (Have I mentioned that?) It's not as luminous as a transparent ink, so it's going to influence the quality of every single color that comes after it.

I decided to take a weird sort of middle-ground. I mixed leftover scraps of the previous transparent blue with a blob of white. This made a nice pale blue that was more opaque than not. It was also unpleasantly... chalky.

So I added more transparent base. This might seem counter-productive, since my purpose here is to put down a color that looks blue, but my hope was to reduce that icky flat quality of the white ink.

I also decided to keep the color entirely out of the body of the bird. (What? You didn't know there was going to be a bird? Clearly you have not been paying attention. Water + bird = typical Sherrie linocut.) This meant cutting a mask, but a much simpler one than I faced 'way back at the beginning. Here it is in place on the inked block: 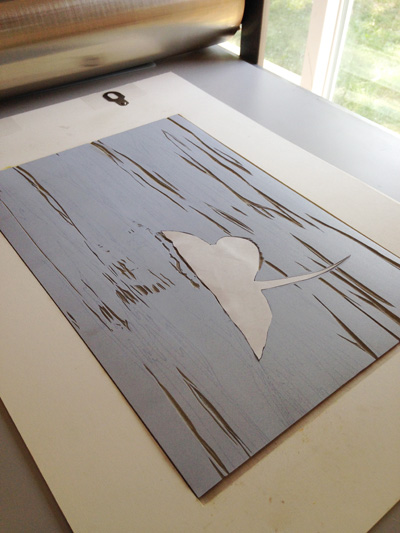 And, boy. That block looks kinda opaque, doesn't it? (Did I mention that white ink is opaque?)


It worked! The blue is perhaps not quite as pale as I might have liked (although it's lighter than it appears in the photo), but it is definitely blue and I can work with it. In fact I think the next layer is going to be back to another transparent blue, but this time I'll let it interact with the bird.

Naturally we've got two days of hot and humid ahead of us, so I don't expect to print before Thursday. But I'll get the carving done and maybe start playing around with another idea while these prints get to the correct stage of dryness.

Any guesses about bird species yet? North American birders worth their waterfowling salt ought to be able to figure it out. The cool thing? It's a bird found in both Maine and Colorado in the winter. (Although when they do turn up in Colorado, everyone gets their birding knickers in a twist.)
at August 27, 2018 4 comments:

Hooray! I spent all day today in the studio. The second round of repairs to the press seems to be holding, the weather was cool and dry enough to work with the windows open and the ant infestation (about which I haven't even begun to rant) seemed under control... so I jumped on in.


Well... actually... compared to how I usually jump in to these things, I did spend a fair amount of time thinking before I started. This image has an interesting (I hope) combination of warm and cool colors... a bit tricky to manage when one is using very transparent inks.

I decided to start with the warm color first... time will tell whether that was a good idea or not. Step 1 was a transparent peachy hue.

Step 2 was... lavender! My goal was to tone down the peachy color a bit and create an intermediate step before going to blues. Purple and yellow are complementary colors, so lavender seemed the best choice.


These are quite lousy photos– I still haven't found a good setup for shooting work in progress– but you get the idea. It doesn't look at all lavender, but I didn't expect it to. It does have a nice sort of rosy tinge to it when you see it up close.

This particular image has some ink transfer from the Sharpie pen I used to draw the block, but I'm not worried about it. It will all be covered by subsequent color passes, and I rotate the prints with Sharpie transfer to the front of the printing queue, where they frequently end up as color testers anyway.

The next step will be a pale blue. I am debating the merits of making it a more opaque color by adding some white, but I'm also considering masking out some areas, too. I probably won't be able to print tomorrow, so I have a little time to think about it. That's not exactly the same as planning, but it's about as close as I ever get.
at August 23, 2018 3 comments:

Workshops everywhere, and some linos, too!

Whew! July and August... what happened to them?

The first week of August I was joined by eleven fun and inspirational women for a week-long field sketching adventure, hosted by the Farnsworth Art Museum in Rockland. Naturally it was a week of record heat and humidity, but we were fortunate that our class met mornings and we were able to avoid the worst of the oppressive afternoons. We spent time at Owls Head Light, the Rockland South Beach, and in the garden (complete with chickens!) of one of our group members.


We spent the hottest morning inside the museum, first drawing from Ai Wei Wei's Circle of Animals gold zodiac heads, and then taking a close look at the preliminary drawings for a number of Andrew Wyeth's paintings. Fun!


The group had such a great time that we've scheduled a "reunion" sketch date next week in Rockport Harbor. I'm looking forward to seeing everyone again and filling a page or two of my own this time! 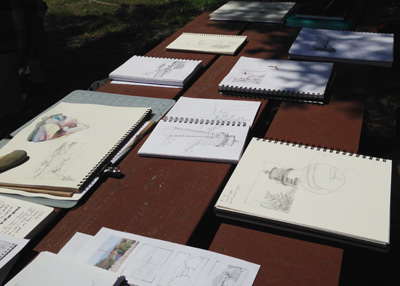 I thought I'd be getting back in the studio the following week, but I was called to sub for some workshop sessions back on Hog Island for Family Camp. This time I was sketching with kids and parents and grandparents... 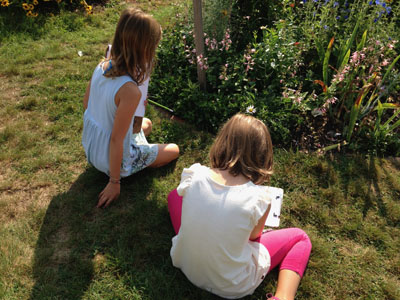 Whew! All done now, right? Not quite! I had a pile of framing, packing and shipping to do for upcoming shows at Ann Korologos Gallery in Basalt, Colorado and Oh Be Joyful Gallery in Crested Butte, Colorado. It was the first time I had to manage all that in my new place, so it took extra time to figure out new working systems. But I got it all done, and I know at least some of the work has already made it to its destination. 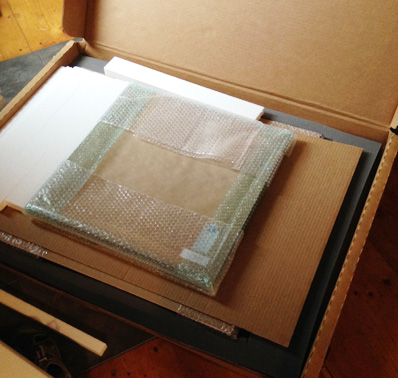 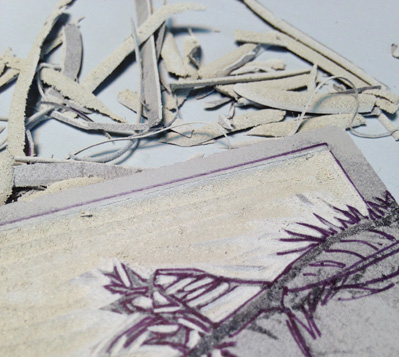 At long last I got into the studio last week, to work on two small linocuts for Project Postcard, coming up during the Birds in Art exhibition at the Woodson Art Museum in Wisconsin. Carving went well, but the morning I set up to print... disaster!!!!

If you've been following along since my move you might know that Presston, my lovely 30 x 60 Takach press, came out of his 6-month storage adventure with a buckled laminate surface on the bed. After some panicked correspondence with the good folks at Takach I was just about to order a new press bed when my neighbor asked if he could take a look at it.

He pronounced it fixable, and proceeded to help me pull up the loose portions of the laminate and re-adhere them. Hoorah! I got a couple of editions through the press in between the chaos of workshops and workshop prep and kept my fingers crossed.

Unfortunately, no doubt encouraged by our two weeks of record heat and humidity, the portions of the laminate that had been intact in June decided to pull up, creating a big bubble on half of the bed. There was enough flat space for me to print the two tiny (4 x 6) pieces I was working on, but once again I was dead in the water for anything else.

This time when my neighbor came by we agreed that the best thing to do would be to remove the laminate across the entire press bed... including the areas we had fixed in June... and stick it all back down again.

As you can imagine, this was a multi-hour, multi-day project. The old adhesive came up fairly easily, but the new stuff we put on in June? Ooph. We finally finished it yesterday. So far it all seems good... so tonight I tore down some paper and started to prep for a new, largeish lino! What a relief. No pun intended.

As for the little pieces created for Project Postcard, I'm afraid I can't show them to you. At least not in full until after the event. But I can make a silly warped image of them... 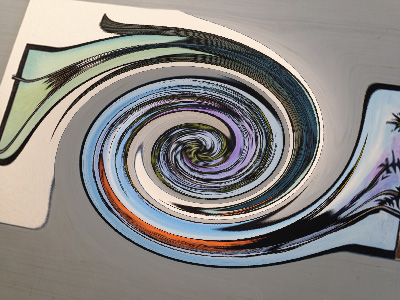 Assuming I don't run into any more press-related disasters I expect to have this new piece underway tomorrow, so hey! It looks like we might be getting back to our regularly scheduled... schedule. Stay tuned!
at August 20, 2018 2 comments: