Alrighty then! As hoped, I squeezed out a little time in the schedule to get the next two color passes done on the small duck linocut that will serve as a demonstration piece at Birds in Art's Artists in Action event on September 8. (About a week-and-a-half away!)

A bit more carving and a second gradated blue pass was applied over the previous. 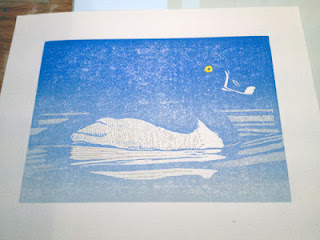 Most of the background came out after that and a gray-brown gave the duck more form. 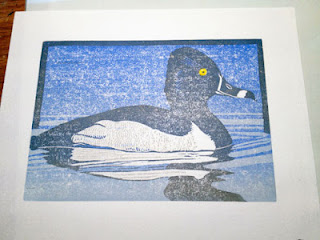 I'm not at all certain I like the half-frame around the top. It seemed interesting in my sketch to have the foreground water flowing out from the around the sides of the border, but in execution I think it's a bit too contrasty or something. Or maybe the ripples shouldn't have extended as high into the background as they do.

OR maybe I'm just obsessing prematurely. There's still one more dark to go and I don't intend to apply it to the border... it could be that everything sorts itself out with the last color. Or not. I might try going back in with a lighter color on the border only...

But none of that will be decided until after the demo on the 8th, at which time I'll do the carving for that last dark and hopefully get all the edition printed.

In the meantime, I will be back to the gull later this week!

Second linocut in progress, too...

When we last left our hero, she had just given herself a major dope-slap for having started a demonstration linocut on the "wrong" registration jig. (The non- transportable jig as opposed to the transportable one.) A second print was in order, especially since the clock is ticking and the demonstration piece needs to be to the almost-finished point by this coming Friday. (Tools need to be packaged and shipped ahead to the venue.)

So The Gull Piece has exited stage left and has been temporarily supplanted by (drumroll, please)...
The Duck Piece.

Geez, I can't seem to get away from ducks, can I?

The first 4 colors went down in quick succession:

Sorry about the weird color artifacts... these three shots were taken one right after the other on the same table under the same light and you can see the color ranges from too pink to too yellow.  Go figure.

My schedule Monday is booked solid with tasks other than printmaking, which ought to give everything just enough time to dry so I can get back to it on Tuesday. I think this demo piece only needs two more colors until it's where I want it for the event.
at August 27, 2012 4 comments:

Alrighty, then! Back to work. My technique still feels a bit wobbly after entirely too much time away from the print bench, but just like a long walk after too much sitting every step feels stronger.

I am scheduled to give a demonstration during the "Artists in Action" portion of the Birds in Art opening weekend at the Leigh Yawkey Woodson Art Museum, so I decided I'd tackle a "simple" bird. One that I could have mostly finished before the event so my demonstration would reveal the dramatic finish.

In theory I did choose a "simple" bird... it's a gull, for heaven's sake. White and gray and black with a yellow bill. But if you've been reading Brush and Baren for any length of time, you know that I have a gift for turning simple into complicated. It's one of my best skills, actually.

Here's how it's gone so far:

The first two colors were done with a mask. Just the bill and a ring around the eye. Easy peasey. 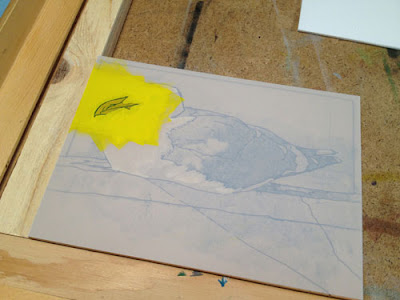 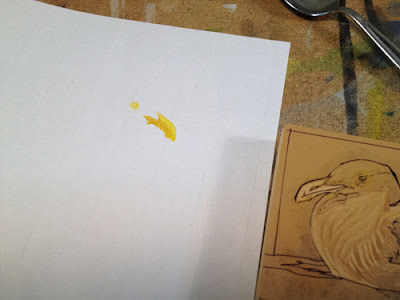 And then a light gray. 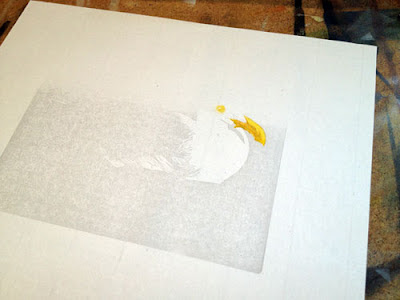 So far, so good. But of course I knew I needed a second gray. Interestingly enough (to me, anyway), I didn't mix a new gray. The first one had a LOT of transparent medium... in fact the ink was mixed with no white at all, just black and transparent medium. So a second transparent layer over the first made a nice, subtle change. 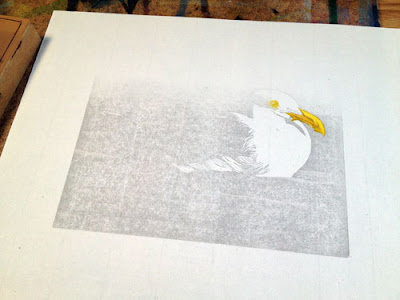 And then a third gray. This time I added a touch more black to the already-mixed ink, just to step up the contrast with the lower layers. 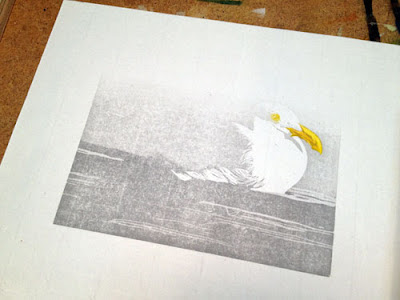 Never one to leave well enough alone, I decided on one more color before the obligatory waiting-for-ink-to-dry stage. A very transparent blue. 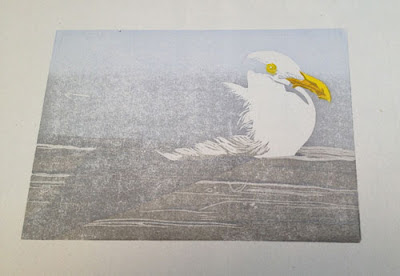 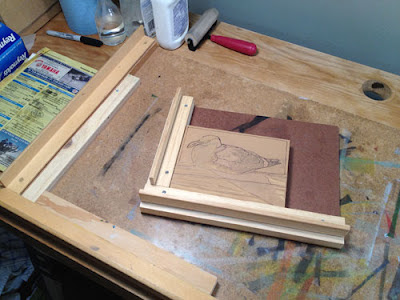 I've been printing using my large registration jig– not the small, portable one. I have to finish printing on the same jig I started with or the registration won't work! (sigh) Oh, well. Guess that means I'll have to start another print this weekend. Darn.*

Email ThisBlogThis!Share to TwitterShare to FacebookShare to Pinterest
Labels: Birds in Art, linocut

Four days ago I came home from my last out-of-town workshop of the summer, a grand experience at Rocky Mountain National Park with fabulous, enthusiastic students. (Thanks, everyone!)

It took me until yesterday to come to terms with the fact that I am NOT immediately racing back out the door again. My suitcase is NOT open on the bed. The laundry has NOT been done. I am NOT carting boxes of stuff in to or out of the car.

It's not like I don't still have plenty to do. There are contract projects still in progress, a private workshop to prep for, and lots of planning to do for exhibitions and future projects. And, yes. I am twitchy to get back into a studio groove.


I had my first taste of getting back to printing this weekend. Birds in Art is coming up soon at the Woodson Art Museum and I promised I'd send a little piece for their Project Postcard fundraiser. Which is, um, due this week. Yikes.

So the good news is, I made a little linocut this weekend. The bad news is that I can't show it to you. It's supposed to be a secret.

The Birds in Art opening weekend (at which this mysterious lino will be revealed) is the first full weekend in September, so not THAT far away. And in the meantime, I'm going to get something else on the table this week that you can see. Because, of course, I also promised a demo during the opening festivities and I need to have a piece in progress to work on at the event!

I have to tell you that printing this weekend was a pretty wobbly business. Sort of like riding a bike, I guess. One might not forget how to do it, but one won't be particularly graceful about it after long hiatus. It will be a little bit before I'm poppin' wheelies again, but I can't wait to get rolling.
at August 19, 2012 2 comments:

Fieldwork Friday: Images from the Road

The crazy pace of the last couple of months is starting to take its toll. I am tired. One more workshop to teach next week in Rocky Mountain National Park and then, JOY! I'm more or less home until early September.

I'm sure I don't need to point out that Brush and Baren has been sadly neglected, but I do want you to know that I know and have been acutely aware of the problem. Next week. After next week I KNOW that I have to get a linocut on the table, so I promise a return to the baren portion of the program shortly.

In the meantime, a few recent-ish pages from my journal to keep you company... 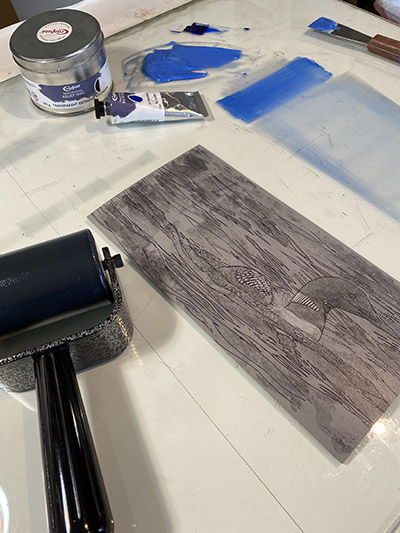