Whew! There's nothing quite so satisfying as a drying rack full of finished prints. Sometimes it takes a while to get to that point, as it did with this linocut, so sometimes satisfaction mingles with plain old relief. (See what I did there? Linocut? Relief? Get it?)

The end game, as often happens, was a bit subtle. First, some darks. Maybe the final, maybe not.


Pretty good... but, yeah. I had avoided the birds. Why? Because I was afraid of them, of course! What if, after all this, they looked horrible in the final image? But they are so small... the larger one isn't even 3/4 of an inch tall... getting involved with little details seemed like a bad idea.

My best methods for dealing with indecision and anxiety are to A) avoid making the actual decision and B) eat chocolate. But neither of these can go on indefinitely without consequences, so I carved a few small marks into the birds, mixed up one last transparent dark, took a deep breath, and...


...wiped a lot of ink. At this stage there wasn't much lino surface left on the block, and no matter how careful I was about inking, I still had overrun. So I carefully wiped extraneous bits after every inking and before the prints went through the press. (Yes, that was a blatant attempt to draw out the drama. Did it work?)


Just enough simplification to the birds and one final dark in some of the rock and shadowed parts of the trees. Whew.

If you've been following Brush and Baren for any length of time you know that I can go down some prolonged "just one more thing" rabbit holes. I did consider making one more little tweak to the image, but after a day or two I decided enough was enough.

All that's left now is to title it. The prevailing breeze on Pemaquid Point has caused these trees to lean back... but the birds of course love to face in to the headwind. I like the idea of push/pull and two different ways to respond to the same situation... but haven't yet come up with a succinct way to express that idea. Perhaps it's a big enough concept to save for another, more dramatic image.

I'll mull it over for another couple of days (eating more chocolate and avoiding another decision), but then it's due for a frame and a trip to New Hampshire for the Pine Tree Pop-Up show and sale at the Woodman Museum, so a christening will need to happen soon!

Linocut in Progress: Sneaking up on the end

Alrighty, then! Progress continues on this little linocut... you remember this linocut, don't you? It's the one that's taking a ridiculous amount of time because it keeps getting interrupted. But it's going to get finished soon. Really it is.

To move that claim along, here is a nice little split roll-up. A transparent gray-green for the top and a more opaque light gray in the lower foreground. 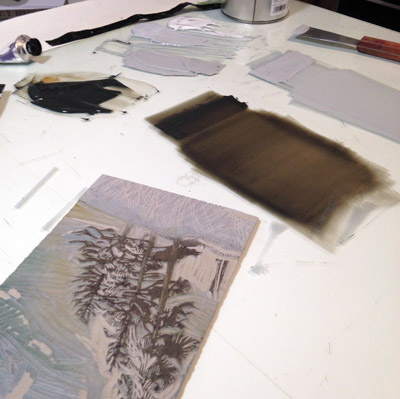 
I was feeling pretty good about the rocks at this point, and the foreground grasses, but I wanted to add a little more color in the lower section. I also needed to start making some decisions about how to treat the birds.


The camera didn't really pick up the subtleties in the darks of the foreground trees, but trust me, they are there. The grasses are feeling pretty good. I think overall it needs just one more dark to pick out some shadows in the rocks and grasses and then some resolution for the birds. With any luck I'll finally wrap this one up this weekend.

And then what's next? I've got a rather involved commission project to get underway after this, and would like to get started on another new small piece, perhaps a snow scene! We saw our first snowflakes of the season today... just a few little squalls interspersed with sunshine... but I know the winter is not far away. I kept a fire going in the wood stove most of the day today, and it won't be long before the stove is the first thing I tend to every morning and the last thing I tend to every night before bed. Part of me is really looking forward to that. Just think how much faster the prints will dry!
at November 08, 2019 4 comments:

The Return of The Hundreds


After a summer of almost zero studio time, my work groove has felt... well... not groovy. Both my hands and my thought processes are rusty, and I have been frustrated with my lack of creative grace.

But then I remembered The Hundreds.

Unbelievably, more than a decade has passed since my friend Tim Deibler and I challenged each other to make 100 thumbnail sketches every month for a year. Even though our success with the challenge waxed and waned, I managed to fill two sketchbooks with compositions and ideas... mostly from life, but sometimes from the television and videos.

It seemed a fine idea to take up the Hundreds challenge again, not only for tuning up my skills, but also for helping me get to understand Maine better. Believe it or not, today is the two-year anniversary of my move here from Colorado, and in a lot of ways I still feel very much a stranger.

So I relaunched my Hundreds effort in mid-October and managed to get 50 sketches done by yesterday, so now I'm off and running on the start of a new month. It's been blowing a literal gale here (more power outages, but so far not in my area!), so today's sketches are a mix of life drawings from inside my house and compositions derived from photographs I took this morning outside. I gave myself no more than ten minutes to find each composition and sketch it in ink before moving on to the next one.

Carrying a sketchbook with me is a long habit, but giving myself an assignment and a deadline ensures that I'll take it out and use it regularly. It feels good to flex both mental and physical muscles... so, hey! Why not grab a sketchbook of your own and join me?
at November 01, 2019 6 comments: