Linocut in Progress: Still in the ugly zone....

Is it just me, or have all the social media platforms decided to change their interfaces at the same time? Blogger, Facebook, Instagram. It seems as though they've all moved the controls, changed the appearance, and simultaneously conspired to cause user irritation.
Maybe I'm just being ultra-sensitive, because if you follow me on either FB or IG, you know that last week some nefarious human being created an Instagram account impersonating me and subsequently spammed many of my followers. It caused no end of headaches, since it is impossible to reach a real human being at any of these companies anymore. I don't want to rattle on about it, but as a public service announcement I just want to say BE CAREFUL OUT THERE. I never send my readers any private messages asking them to follow links or donate any funds, and I immediately delete messages I receive under the same circumstances. Stay vigilant!
But enough of the soapbox, let's talk lino.
There have been a lot of distractions in the last couple of weeks. Between the IG woes, an online course, and a live workshop (my first since last autumn!) studio time has been erratic. But then again, so am I right now. Erratic, I mean.
So where are we?
Right. We're at Step 6 already! There are four subtle layers of color in the background water area, and in my last post the print had just entered the Ugly Duckling Stage with the application of Step 5. I'm afraid we're going to be in this questionable stage for a while longer, so I hope you've got plenty of popcorn and don't mind a cliffhanger.
Step 6 was a straightforward orangey-ochre applied to over the entire block. It went a little way towards unifying some of the blobbiness that started to appear in Step 5, but not much.
The seaweeds which cover the intertidal zone all along the Maine coast range in color from a sort of orangey-ochre to an ochery-green to a blue-gray and a green that's almost black. I find these colors really tricky to mix effectively, especially when I'm layering transparent color.
For the next color I mixed a fairly dark, transparent green-black. I wanted to dull some of the rusty orange from the previous pass, and "cool" it down a bit, without getting too dark.
The tricky bit is trying to anticipate how colors will interact. On the block this color looked very dark and gray, but on the print..... 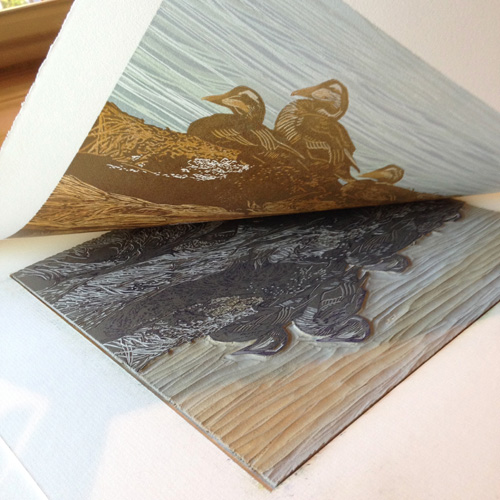 It produced a rather nice brown.

In general this is all feeling okayyyyyyy..... but I don't like how dark the birds' heads have become. And I want to start developing some of the cooler-toned rockweed that's mixed in with the more ochery bits.

This looks like a job for SOOP-er Weird Color Woman.

How about we roll some plain opaque white over the upper parts of the birds and a nice, somewhat opaque, blue-gray over everything else? That ought to do... something. Right?

Well. It's definitely done... something.

Believe it or not, I'm actually not panicking at this point, although maybe I should be. There's a bit of wet ink glare in this photo, so it's hard to tell, but I am happier with the birds' heads. Not much of the gray color will remain in the final image, I don't think.... but it has put down an interesting base and will create some nice highlights in the darker rockweed to come. Well, that's the theory, anyway!

Alrighty, then. What the heck is going on in the studio? Stuff. That's what's going on. Linocut stuff. Whether's it's good stuff or bad stuff, I can't really tell yet, because, yes, Virginia, there is an Ugly Duckling Stage (henceforth known as the UDS), and we are in it.

But let's see what happened right up to the time of entering the UDS, shall we?

There was still a little work to be done in the background, which, as you might have guessed, is the watery region of this image. For this last bit I rolled up a transparent blue and a teal-y color to create a subtle blended roll.


With three layers of ink already on the print, it was important to think about minimizing the impact of additional bluey/greeny colors where I didn't need them, so for this pass I cut a newsprint mask to cover the foreground subjects and keep that area of the print clear. 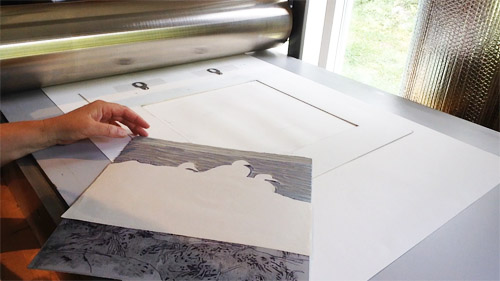 Yes, indeed, those are silhouettes of bird shapes against the watery horizon. They have a little bit of a dark halo around them because the newsprint masks weren't spot-on, but it's okay because the next color pass will cover all that up with an opaque white. The new white won't look bright and pristine, but I am only aiming to lighten the overall value in the birds and combat the cool undertones. The real business that's getting started now is the foreground: rocks, barnacles, and rockweed. The rockweed's underlying color is a warm yellow ochre, so I'll blend that with the white to create a nice transition. I hope.


Aaaaannnndddddd........ Here we are, squarely in the UDS. (That's Ugly Duckling Stage, if you've forgotten already.)

I should probably note that in addition to a rather unsightly collection of colors, there were also some printing issues with this particular sheet. This was the first or second print at this stage, and I was having a little trouble with both press pressure and amount of ink on the block. Things evened out after this, but of course I neglected to stop and take a photo.

At any rate... I'm now committed to a tangle of vegetation and birds, so the next carving stages will be slow and complex. Fingers crossed I can find my way back to some harmony by the time I reach the end, because right now things look rather.... well.... Ugly. Ducklings not required.
at August 07, 2020 1 comment: