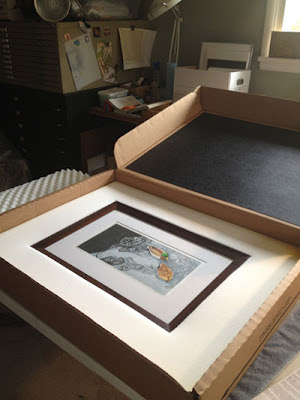 My days continue to be about illustration projects and workshop prep rather than printmaking, but I did at least get to LOOK at a linocut today.

This is "Pas de Ducks," all framed up and ready to ship off to Birds in Art at the Woodson Art Museum. The exhibition isn't until September, but right now it feels good to be able to tick anything I can off my to do list.

One of the more nervous-making things about this business of art is shipping framed work hither and yon. I frame my prints on paper in a traditional manner– mat, glass and frame– but for exhibitions most venues prefer plexiglass. Plexiglass is lighter and less prone to break, but it's delicate stuff and apt to scratch. What to do, what to do?

Enter the MasterPak Strongbox. It's a double-walled box built expressly for shipping artwork. The top and bottom are lined with a hard plastic "puncture guard" (the black you see in the lid), and the interior foam is customizable to fit your exact piece. There's a piece of waffle foam on the bottom, a customizable piece in the middle, and another piece of waffle foam on the top. Very cool.

They're not cheap. The double-walled versions with puncture guard start at about $70, but the crates are reusable. (And even re-customizable if you save the bit of foam you take out of the center the first time.)

Artwork framed in plexiglass? Check. Packed in a great crate? Check. Off to the shipping agent? Check. Hey! That's THREE things I get to cross off the list.
at June 28, 2012 4 comments:


When the snows didn't come last winter, we knew we'd be in for a dry summer. When what little snowpack existed had diminished to 4% of normal by mid-May, we knew the river would be low and tourism would be compromised. When the wind never stopped and temperatures crawled up into triple digits, we knew our gardens would parch and that we needed to drink more water.

And with all these things we knew there would be wildfires. What we didn't know was that there would be so many of them, impacting the entire state and even threatening major metropolitan areas.

The reports change frequently, but the most recent information I find lists 10 large "active" fires across Colorado and a half dozen more that are "contained" and being watched for flareups. The High Park Fire near the city of Fort Collins has consumed more than 250 homes in 18 days. The Waldo Canyon fire, just 4 days old, experienced a huge expansion this afternoon and is now burning homes on the west side of the city of Colorado Springs. 32,000 people have been evacuated in the path of that fire alone. Tonight a new blaze erupted west of Boulder.

And that's just three fires along the Front Range.

So far the area where we live is not in immediate danger, but we are nervous. We haven't had measurable rain in weeks, and dry thunderstorms that produce only wind and lightning are no one's friend.

For now we keep going about our business, but always aware of the smell and haze of smoke.

Yesterday I painted an illustration of a porcupine for a client project. I think I feel a bit like a porcupine myself... quills at the ready and in a defensive posture. 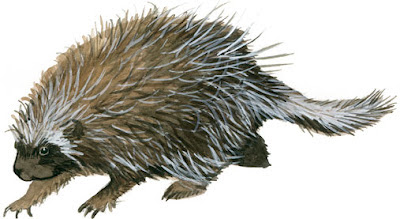 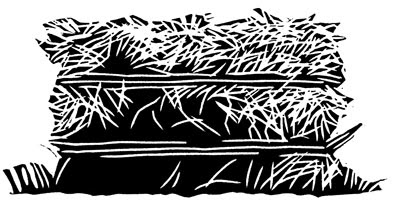 Literally! Making linocut hay. Or at least making an image of hay out of lino. Fun, eh? The crazy, never-ending map icon project reappeared last week with a new list of 10 more images to create. I wasn't quite sure what to do about item #7 (hay), but I'm hoping this bale will do the trick. What do you think?

Everything's at fever pitch again... how DOES this keep happening? I've got three illustration projects, a writing project, a design project, three multi-day workshops to prep, an art festival to get ready for AND this weekend is Salida's annual ArtWalk. And, gee... one of these days I'm going to actually get back to work on my own stuff. Really I am.

If you're in Salida this coming weekend, stop on by the Maverick Potter on F Street. On Saturday the local linocutter (that's me) will be in da house, as will the local Stickist and the potter of maverick tendencies. I'm pretty sure there won't be any hay bales, but you just never know.

Here in the upper Arkansas River valley we're accustomed to dry. The Continental Divide defines our western county boundary: Pacific moisture tends to stay on the other side of the Divide and here in the rainshadow a typical year brings us a scant 10 inches of precipitation.

This is not a typical year.

Even the high country received paltry little snow last winter and by the end of May the highest peaks of the Sawatch Range already looked as brown as August. The path under the F Street bridge, usually flooded with runoff and impassable this time of year, has barely even been damp this season.

A newspaper headline last week declared area snowpack down to 4% of normal. We're not just dry, we're dessicated. This weekend is the annual FIBArk whitewater festival and yesterday we saw heavy equipment in the river, moving rocks to create some sort of flow for the raft and kayak races. At least one event had to be cancelled because of low water. I've been in this valley ten years, and I've never seen it like this.

I can't decide if it's strange or completely natural, then, that I would choose to spend my drawing time today absorbed in dry plant material. I've been longing for something lush and green, but here I am engrossed in brittle and brown!  I love the twisty aspect of this chunk of vine, though, drawn from three different angles. Maybe it's a good reminder that we never know what's ahead, and that maybe those gathering dark clouds will drop a little wet cheer. Rain on tomorrow morning's parade? Bring it.

This blog DOES say "brush" in the title, after all 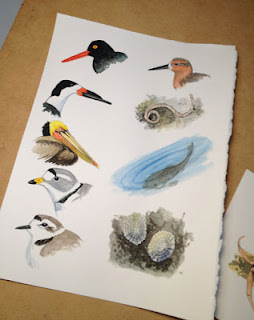 Brush and Baren. There was a reason for the title, 'way back at the end of 2006 when this blog began. At that time I was still spending time wielding a brush and sloshing paint– at least more than I have been lately.

This week I'm back to being a woman of many hats: printmaker, illustrator, writer, painter, photo researcher, administrator, and even vintage magazine seller while a friend is out of town and her online store needs minding. Thankfully at least one of those tasks will be finished after tomorrow. I'm feeling a bit... stretched.

But I was pleasantly surprised to have some watercolor illustrations work out as well as they did over the weekend. A few shorebird beaks and their different foodstuffs were the topic, and by golly both brushes and pigments (not to mention eye-hand coordination) were cooperative.

It's back to the lino illustrations tomorrow. Stay tuned.

Hooray! There are lino crumbs on the table again! Nothing too exciting, unfortunately, just a few more map icons for a client project. But at least I got to carve for a bit today. Tomorrow I have to pick up a brush and do some watercolor illustrations. No rest for the wicked. 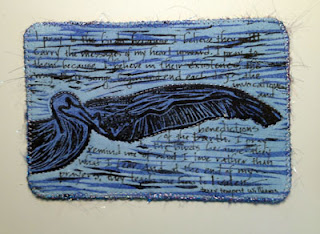 Lest you all fall asleep for lack of interesting printmaking information, I'd like to share something I got in the mail last week. My friend Beki, maker and keeper of journals, spinner of yarn, knitter of garments, and creative wonder, sent me this spectacular postcard.

Although I hate to call it a postcard, since it's a block print on fabric with hand calligraphy, quilted, and stitched around with sparkly thread. And, yes, it came through the post just like this.. no envelope. A beautiful soft work of art in my mailbox. Thanks, Beki... I keep it on the "treasure shelf" above my work table. It makes me smile every time I look up.
at June 09, 2012 3 comments:

Transit of Venus, projected through my spotting scope onto a sheet of paper. If you missed it today, the next one will be in the year 2117. Take your vitamins, it's gonna be a long wait. 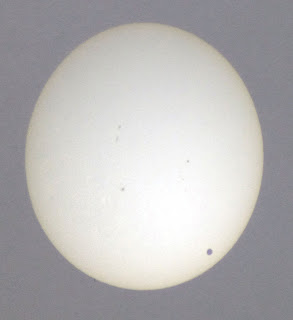 Email ThisBlogThis!Share to TwitterShare to FacebookShare to Pinterest
Labels: miscellany

Why, yes. That IS lino on the table.

A piece of lino on the table must mean something interesting is about to happen. At least I hope it does.