Linocut in Progress: Finishing the eiders

Alrighty, then! In the space of 48 hours both my quest for a new car and my quest to finish the eider linocut were resolved. More or less. There remains the obligatory shuffling of papers for the car and the equally obligatory shuffling to find a title for the image, but at least things have moved on to a new stage.

Step 10... AKA the expected-to-be-final-but-then-alas-not-quite-final step. I mixed a bit of sepia into all my scraps of greenish and ochre-ish brown ink and rolled the resulting deep brown across the entire block.

The result was good, but not exactly right...

...which meant there was one more pass to go. I'm sorry to admit I didn't take a photo of the last ink rollup, but here's the carved block after I had finished printing.

The birds' heads and backs have been mostly carved away, as well as swathes of rock weed in areas that are shadowed, but not completely so. It seems like there's a lot of material still left on the block after 11 stages, but believe me, a lot has been carved away. It's just been in tiny bits at a time.

The final color was the previous brown with a good amount of Prussian blue mixed in to give it a coolness that seemed appropriate for the deeper shadows.

And... heeeeeeeere's the final image. (This is a scan rather than a photograph, so the colors are closer to correct. The photos always seem to be a bit lurid.)

All that remains is to find a title for it. Female eiders camouflaged out in the open are a common sight here in Maine. The birds are similar in color to the rock weed that is exposed at low tide... its slippery fronds making it treacherous for human beings and other predators to traverse the rocky shore. Lingering at Low Tide? Perhaps.

I've already got another large-ish lino in the long, skinny format drawn up, but it might be time for me to tackle some smaller images. I am undecided. What I DO know is next on the horizon is finally pulling together my online Learn Linocut course! I've promised my producer than I'll have the written portion...well... written... in the next couple of weeks, and final feedback on the video portion. The goal is to have everything ready before the holidays... so if you know someone who wants to learn the process I should have at least some of your holiday shopping solved for you!

Linocut in Progress: Finishing the eiders

Alrighty, then! In the space of 48 hours both my quest for a new car and my quest to finish the eider linocut were resolved. More or less. ... 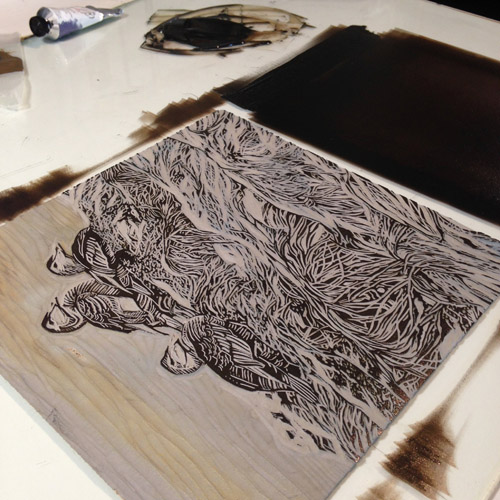