Print Day in May has come and gone for another year. PDiM is an annual, international event founded by printmaker Robynn Smith. It's a day that unites thousands of printmakers around the world, as we work wherever we are–studios, print shops, kitchens, and picnic tables– and share our processes with audiences live and virtual.
I wanted to be finishing a piece on the actual day, which this year was May 7. (PDiM always takes place on the first Saturday in May.) I got a bit of a late start, and for a while I wasn't certain I would get there in time, but whew! I did. I worked small and... dare I say it?...with a "simple" image.
So here we go!

If you follow me on any other social media channels you know that this piece features a common loon, so no reason to be cagey about the block in the early stages. The format this time is just 6" x 12", and it was amazing how quickly I could proceed at that size.

So, as is often the case, the first step was a pale blue. In the interest of full disclosure, however, I will confess that I printed this first step twice, because I was having all sorts of weird problems with streaky ink coverage. I ended up stopping and completely re-adjusting the press, which wasn't the entire problem, but it did help.

So, yep. Bird in water. Who is surprised? No one. Absolutely no one.
And it's water on a sunny day, so it's blue, blue and more blue!
I could jump on in and show you the next blue step. And the next. But what's the fun in that? Better to have a little suspense, even if it's faked. (Because I said so, that's why.)
Instead, I'll show you a little peek at my studio with the new prints underway. You'll recognize a few things on the back wall, I think. All have been documented here on Brush and Baren at some time. I'm getting ready to install some shows in the next couple of weeks, so I've got framed work stashed everywhere. I do rather like this group all together, though. It's going to be lonely when I send them all off to hopefully find adoptive homes! 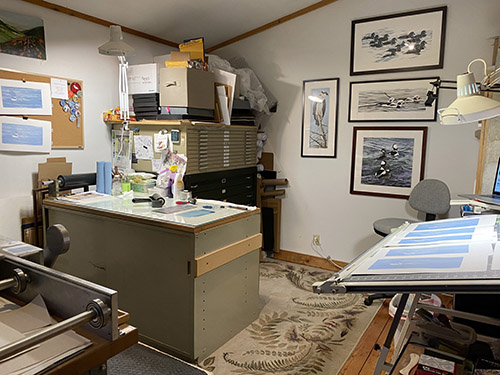