The current linocut in progress is an odd one, to be sure. It seems like I carve and carve for hours, and then when I print it barely looks any different than the previous color pass. Am I in some sort of weird loop in the space-time continuum?

Don't believe me? Take a look at this:

Blues! Nothing but blue ink, over the entire block. Of course these are transparent blues, so the greens will still look green. Like this:

See? It all still looks very much like the previous two or three passes. But I was feeling pretty good about everything at this point... although still troubled by what to do about the grasses in across the middle that are still blue. But, hey. Carve now. Worry about color later.

See what I mean? Although if you flip back and forth you will be able to see the subtle differences.

So now it's back to carving again. The things that are bouncing around in my head as I do this?

- It's probably time to start some carving to define the bird(s).

- Will one more transparent gray finish off the background grasses in a suitable way?

- How MUCH contrast should I aim for in the foreground grasses? And should the next color pass be of warmer temperature?

- How will I resolve the water/grass intersections in the center portion of the image? I think there's only one more little bit of dark blue value to go, so can I get away with shifting to some paler greens first? Or should I go ahead and do the dark blue across the entire center, then carve away the last of the water, and probably have to resort to using some more opaque color in the grasses there? Will this opacity look out of place when everything else is so transparent and luminous?

But, as before... the first thing to do is carve away the areas that I know I would like to remain the color they are, so I'll solve the what-to-put-on-top-of-it questions later. (I did mention that avoidance was one of my better skills, right?)

The current linocut in progress is an odd one, to be sure. It seems like I carve and carve for hours, and then when I print it barely looks... 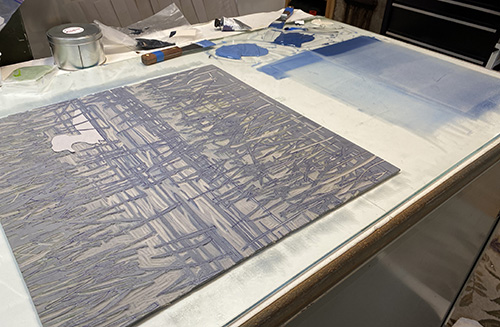