Linocut in Progress: Is the end finally in sight?

Well, yes... we are headed towards the finish, but not quite there yet. This piece has turned out to be one of those learning experiences that we both celebrate and lament. It's taking SO LONG to finish what was intended to be a "simple" composition. Just goes to show ya' that apparently simple is not the same as actually simple.
By now we are at, what? Step 14, I think. This was a transparent warm gray that was rolled over the entire block. It influenced sand, bird, and background simultaneously.

Okay, well, that's something. I think the sand is finally finished... mostly. I want to suggest little footprints moving into view from the lower left, so material for that needs to remain on the block, but the rest of the foreground can be carved away in wide swaths rather than tiny chips. Satisfying.

But I need to resolve the background shapes, which I've been making up as I've gone along. It's time to slow down and actually think about it... with a pencil in hand! I took a photo of the current stage of the image, flipped it around in the computer so that it faced the direction of the block, printed it out, and voila! A way to work out some of the darker shapes.

Keep in mind that whatever I draw in pencil on my mock-up will remain uncarved on the block; it's the lighter bits that will be removed from the lino. This drawing wasn't completely accurate, but it was a helpful guide for sorting out the next carving stage. When the carving was finished I rolled out another transparent gray across the entire block and....

Okay. Getting much closer to the end now, but still not quite there. I used the computer printout method again to refine the shapes even more. Seems a bit busy now, but it all definitely reads as detritus on the beach.
And yes, I employed the computer printout one more time to sort out the next stage. There's really not much material left on the block and this stage and it's hard to understand what's happening without the printout for guidance.

And yes. Another transparent gray. So many grays in this image! I think the footprints are completely done now, so I'll clean them off before putting in what I hope will be the last dark bits. Stay tuned...

Well. I see by going back and rereading my own post that I anticipated only two more color passes to finish the osprey linocut . Yeah. You ... 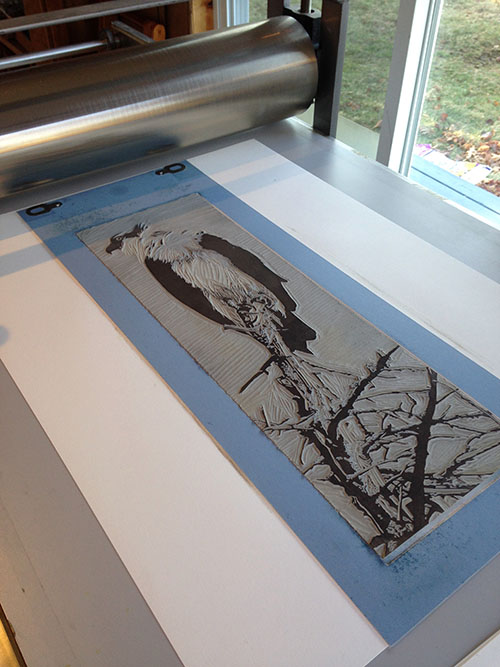