Linocut in Progress: Out of the shadows and into the woods


With this step I FINALLY figured out what I should have been doing all along. Instead of a blended roll, I should have just stepped down the values as they came forward. Duh. At this stage I have removed all of the snow and shadow material in the upper third of the block. I could have done this two passes ago and saved myself a lot of agony, but I didn't. Unfortunately the shadows are now more solid-looking, less transparent and "glow-y" than I wanted, but I'm just going to have to go with it.

Next I removed all the shadow and snow material from the middle third of the block and inked only the lower third. Like this: 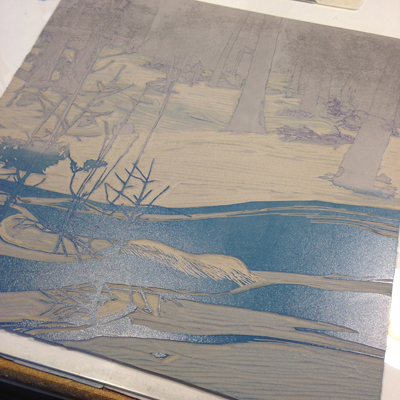 Because I don't want the dry upper portion of the block to pull up the existing ink layers on the prints, I cover that area with a newsprint mask before running it through the press. Like this: 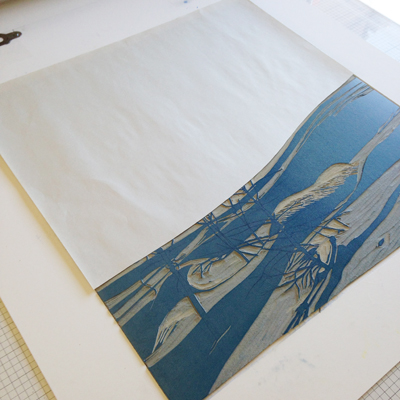 And here's Blue Pass # 7. Also known as the overkill pass.


So now there's a subtle value change in the overall shadows from back to front. Which is what I thought I was doing all along, I was just making it harder on myself. As usual.

The temptation to stick one more blue in the foreground was strong, but I really needed to just stop and get on with the rest of the image. The entire thing needs to be done by the weekend and there are still at least 5 colors to go.

And just in case you're as sick of blue as I am... here's a gray. It's always a scary moment when I move away from the harmony of a single color and snap some values back in the other direction. But, hey... at least we're out of the shadows and into the trees.